Swing Quantize and the PLAY FX

How to set up your own 'groove quantize'.
SWING QUANTIZE and the PLAY FX
This is found on the main sequencer screen at [F2] PLAY FX. The XF has a special function that allows you to set up your own groove quantize. It basically has parameters that can be applied (non-destructively) to your drum data. When we say non-destructively, this means that the changes occur in real time without actually re-writing the events on the EVENT LIST. This allows you to try out different things without having to actually damage the original data. The principal parameters are: Quantize (Value and Strength), Swing (Velocity, Gate, Rate), Note Offset, Clock Shift, Gate Time, and Velocity (Rate and Offset). 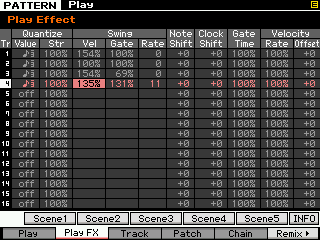 Here Quantize can be applied after the fact, forcing notes to different timing. You can take straight time and apply the various timing grids outlined in our last section (straight or triplet). These are applied in real-time. You can use this PLAY EFFECT, to try out quantize setups before making them permanent.Remember quantizing is not a cure-all. The use of quantize cannot not always fix all timing issues in your recording. It is possible that quantizing can actually make it quite a bit worse. If, for example, you select a value too large, you may find that notes are jammed to the same clock pulse. Say you played 16th notes and you quantize to 8th notes, you will likely hear notes moved on top of each other. You will have to determine this for yourself. If you are unfamiliar with the musical symbols for timing VALUE, you may want to get a basic book on music notation. A note with 3 flags is a 32nd note, a note with 2 flags is a 16th note, a note with 1 flag is an 8th note, and a note will no flags (just a stem) is a quarter note. Any of these values followed by the number "3" denotes a triple value. The STRENGTH parameter (Str) will determine whether the notes are moved fully to the quantize value (100%) or to some lesser degree.

The Note Shift function is useful to actually shift the drum KEY that is sounding; with drum sounds this is very useful. When used in conjunction with Extract or with Divide Drum Track you can easily and quickly alter the drum sound played by a track. For example, say you recorded a pattern and want to try out a different snare drum sound – you can either extract or use divide drum track to isolate the drum to its own track, then you can use the NOTE SHIFT to shift that drum to a new sound using the dedicated snare kits.

You can Clock Shift any event occurring on a track by designated number of clock ticks. You can shift it as far back as 120 ticks (a 16th note) or you can "push" the beat by shifting it as many as 120 clock ticks forward. Sometimes shifting a snare 6-10 ticks back is just enough to give the right feel. This function is like a programmable quantize.

Gate Time is how long a note sounds. Now while most of the preset drum sounds are programmed to ignore note-off, you can edit a drum sound or if you have a user sample that is set to respect note-off, you can change the duration of any of the sounds. This is very useful on a crash cymbal when you want to create a "choked cymbal".... Edit the Crash cymbal in your drum kit so that it "RECEIVE NOTE OFF" = ON. This way the GATE parameters will affect it. You can also use the Gate parameter very effectively on musical (non-drum) sounds.

You will find this GATE TIME (duration) parameter most useful on 'normal' music sounds. Part of what makes something swing is as much when you play it as it is how long you play it for. If you picture a band with a horn section hitting a riff together – it is as just as important to know where the note stops as it is where it begins. If one of the horns hangs a note over into the next beat it will kill the swing.

The Velocity Offset can be used to add accents or de-accent a particular beat. Offset adds or subtracts a set value to each event. Remember swing is not just timing, but about impact and volume of what is played. "Ghost" notes can add great realism to your drum track. The Rate parameter here under velocity, is offsetting the velocity but by percentage – so instead of adding a fixed value to each event (offset) it increases or decreases the value in proportion. 100% is no change 200% doubles the velocity of all notes, while 50% reduces the value by half. Of course you cannot exceed a maximum value of 127 nor can you reduce output level below a velocity of 0. (Duh!). With this function you are setting up a custom quantize - think of it as a programmable Groove Quantize.

While on this subject (Velocity), it is a good idea to make your principal kick and snare strikes somewhat less than 127. A drummer does not always hit the snare drum as hard as they can on each stroke. They have something in reserve. How can you program an accent if every hit is 127? If you make your main kick and standard backbeat snare a velocity of 96 or 105, then when you punch it up to 127 it will have some IMPACT! This, of course, is subjective. But recognize that in listening to live drummers you can pick up on things like this. For example, they very often "punch" up a crash cymbal by simultaneously hitting the kick drum. Use the mixer in the Motif XF to mix. If you want the drums up front (as in many types of popular music), you can still do that without making every snare and kick 127. Learning how to turn some things down so that others stand out is the "art" of mixing. You will find that 0-127 is a nice range if you use it... if you have everything up near 127 you cannot appreciate the soft-loud dynamics of your own music. It is that soft-loud dynamic range that makes music (and sounds, in general) interesting to the human ear. Of course, the genre of music dictates how much, but when dealing with MIDI recognize that the full dynamic spectrum ranges from 0 through 127 – and if 127 is the absolute loudest that you can get, you probably want to reserve this for the very loudest portions of the music composition. It is just common sense.

Tip: The PLAY FX are non-destructive and as mentioned can be used to "try out" various variations, but they can also be captured in the five SCENE 'snapshot' memories for real time recall. For example, you may apply a triplet (shuffle) feel by applying a re-quantization of the data and during playback, instantly switch the groove between feels. When using SCENE MEMORY to alternate "feel" you will want to STORE a separate "START CONDITION" Scene - a 'snapshot' that returns the settings to their original status. Every MIX automatically has a "Start Condition" that is recalled when you initially recall the SONG or PATTERN, but if you are using these on the fly, you will want to have that condition also stored in a SCENE MEMORY so that you can instantly return the MIX to normal. See the article on "SCENES and TRACK MUTES".

Normalizing Play Effects
Normalizing Play Effects takes any non-destructive alterations you have made to the Play FX function and writes those changes into the track data. This makes a destructive or permanent change to the data. When you Normalize Play FX the Play FX grid will be "zeroed" (returned to neutral values).
• Press [JOB] from the main PATTERN or SONG screen
• Press [F5] TRACK
• Select JOB 05: Normalize Play Effect
• Select the track or select all tracks.

Use this [JOB] when you want to lock in the changes and write that data to the track. As mentioned, Play FX can be applied non-destructively and can be stored/recalled with the SCENE "snapshot" buttons. You can use your discretion here: do you want to dynamically apply the Play Effects or make their influence a permanent part of your Event List data? As an alternative to applying the JOB: Normalize Play Effect, you can simply place the track in OVERDUB Record and let it play through once. This will realign the data according to the settings you have made on the [F2] PLAY FX screen... just as if you had sifted the data through a grid and realigned it.

This normalizing function should not be confused with the normalizing of an audio sample waveform. When you are talking about normalization of wave data, you are changing the output level of a sample so that the loudest peak reaches 0VU on the meter. This normalization (of MIDI data offset) is all about making the non-destructive edits you have made permanent.
Tweet