MOXF Vocoder
The Vocoder requires you connect a dynamic microphone to the mono AD Input on the back panel, and setup for mic level signal. The Vocoder will apply your voice as a "modulator" for the synth sound. Pitch is determined by the key or keys you play.

Serious WARNING: In general keep the output of your MOXF slightly lower than normal so that when the Vocoder comes on you do not split your head open with LOUD output. It is better to start soft and turn up, then to turn up first, blow your ears out and then try can get your hearing back. Please trust us on this...

Turn the front panel GAIN knob to minimum to start.

SETUP for VOICE mode
Call up normal Voice
Setup the microphone
Plug in a dynamic microphone to the Left A/D INPUT jack and Set the MIC/LINE parameter to MIC:

*If you are plugging a dynamic microphone directly to the jack, MIC is the appropriate setting. Set to "LINE" if you are using an external pre-amp or mixer to prepare the signal for the A/D Input.

On the MOXF front panel: 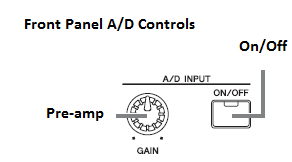 Turn the A/D Input [ON/OFF] = ON
Turn the GAIN knob on the front panel clockwise to increase the level until you can hear yourself comfortably.

This is a very good reason to use a uni-directional microphone for this purpose, because you can control where the pickup pattern of the mcirophone is focused

In order to 'work' the Vocoder (Vocal encoder) - you must disturb air molecules in front of the microphone while simultaneously pressing keys on the keyboard. The sounds you make in front of the microphone will be applied the pitch or pitches of the keys you are pressing. Your Voice is literally encoded into the synthesizer. The more "noise" there is in the synth sound, the more intelligible the Vocoder can sound.

When setting the Vocoder in a Performance, or a Song/Pattern, the Vocoder Voice must be assigned to PART 1, because Part 1 contains the the routing to support the A/D Input to its Insert Effect block.

Facts:
_The Vocoder is assigned in the synthesizer VOICE as its Insertion Effect, it is not assigned to the microphone input... Rather the A/D Input Part (microphone) is fed into the synthesizer instead of directly to the output. It is routed to the synth's Insert Effect as a modifier.

_When your MOXF is set USB I/O = "2StereoRec" mode, the A/D Input cannot use the SYSTEM Reverb and Chorus processors.

_When your MOXF is set USB I/O = "1StereoRec" mode, the A/D Input has Send amount controls to the System Effect.

The 2StereoRec (dual stereo bus outputs) is designed for recording with a DAW computer software. The A/D Input is assigned to USB 1/2, while internal Parts default to USB 3/4 but can be freely reassigned to USB 1/2 when you wish to isolate a Part(s) to its own audio track. The A/D does not get routed to the shared (communal) SYSTEM Effects, in fact, when recording audio you typically record without reverberation (which is added later during the mixdown). Isolation is usually the goal during audio record.

MOXF: Setting up a Microphone, Guitar or other A/D INPUT

MOXF: Setting up a Microphone, Guitar or other A/D INPUT