These new features streamline Pattern Sequencer operation.Want to check out all the features added to Yamaha MODX OS v2.5? Check out the overview article here.

The Performance Pattern Sequencer introduced in OS v2.0 added loop style MIDI recording to MODX. The latest version, OS v2.5, adds some great new features and refinements that you will love. Check it out!


A great new feature is the ability to add parts during Pattern Section Record. Here’s how I created the quick example you can check out below:


1. Choose the single Part drum kit “Trap Kit”, press [RECORD] and select Pattern Record.
2. The default tempo is 135 bpm. You can change that by tapping on “Tempo” and entering what you want. For this example, I changed the tempo to 80.
3. In the screen shot below I set “Rec Quantize” to 16th note (120, which at 480 pulses per quarter note (ppq) equals a 16th note in case you were wondering). This automatically quantizes anything I record to the nearest 16th note. Here is the starting point: 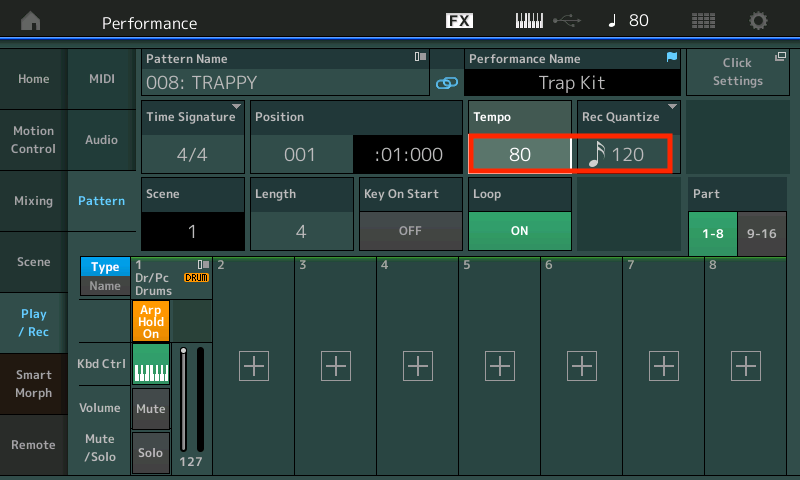 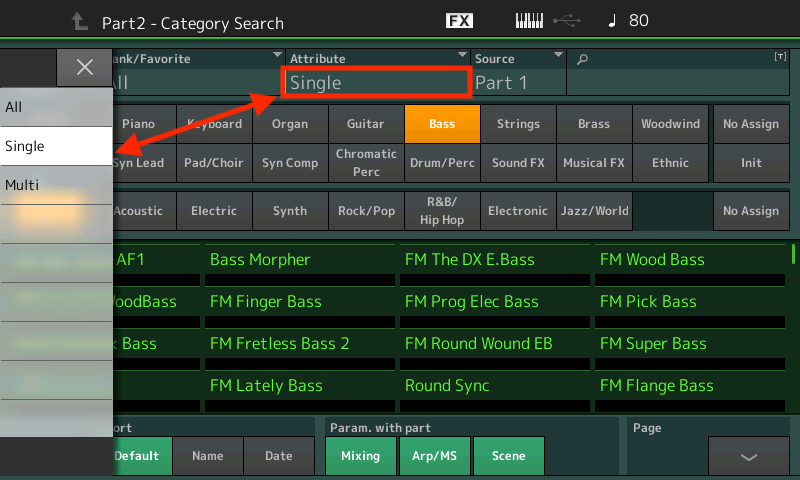 6. Choose “Bass” as the main Category and “Synth” as the Subcategory, choose “FM Lately Bass” and press [ENTER] to return to the Pattern screen: 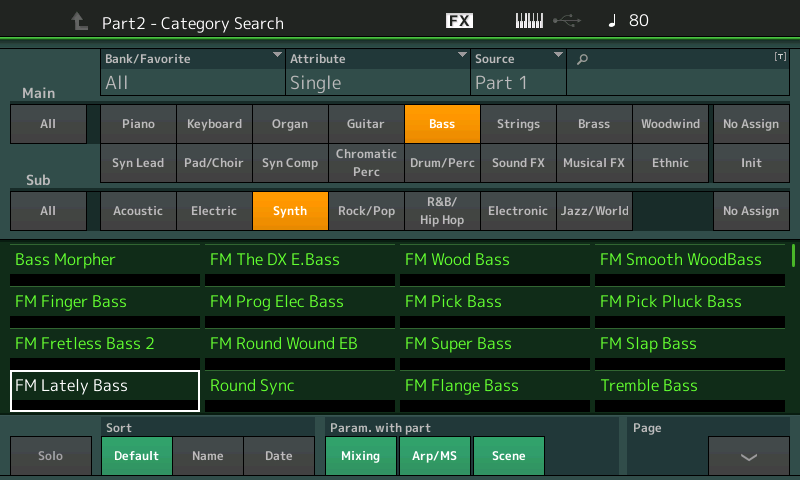 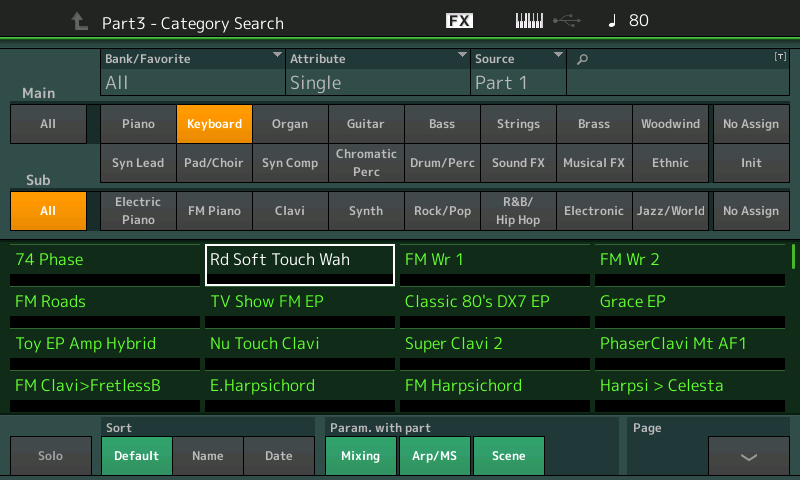 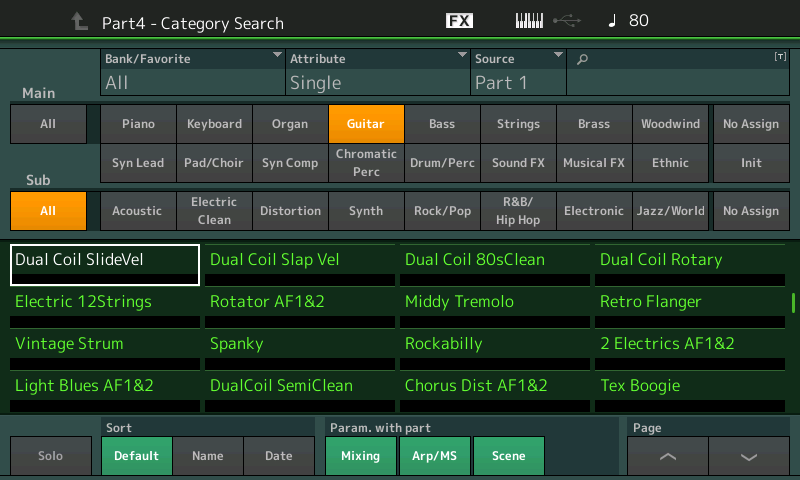 10. Repeat the process again: Press [RECORD] when you are ready to record, record Part 4 and press [STOP]. Here is the 4 Part, 4 Measure Groove: 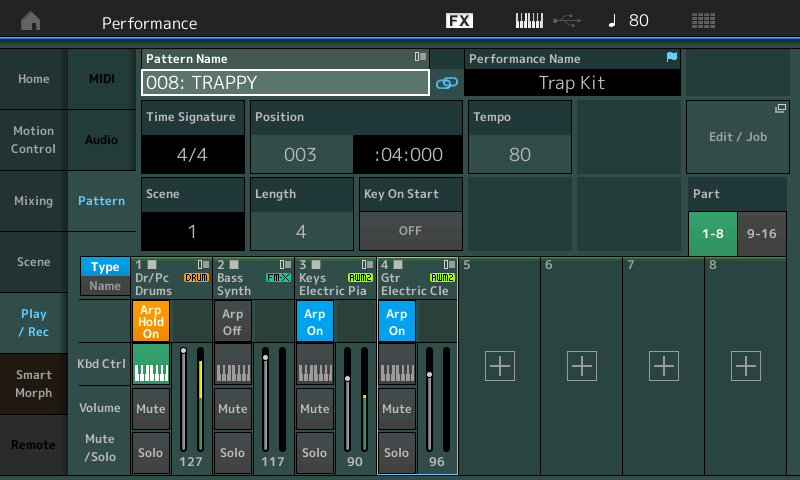 11. Finally, I added a synth lead in Part 5, changed the Pattern Scene Length to 32 measures and recorded a synth solo that starts on measure 8. Among the cool features about a Pattern Scene is you can create tracks with different lengths. The first 4 tracks will continue to loop for 4 measures, but the synth solo will play for 32 as long as the length is set to 32: 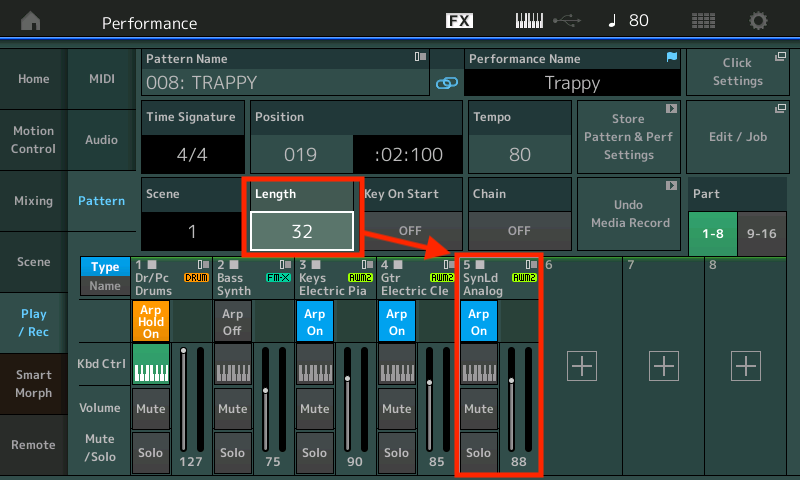 You can start with a Single Part Drum Kit, press [RECORD] and build a Pattern track by track without ever dropping out of Pattern Record. This is a great improvement to the Pattern Sequencer.


With MODX OS v2.5, you can now use real-time overdubbing to record your Controller actions while deleting previous Controller events in a Pattern Section. A perfect example is Overdubbing Super Knob Control. Say you recorded a Pattern Section with Super Knob movement that you decide later could be done differently. Simply press [RECORD], select “Overdub” and re-record your Super Knob movement. This works with all the physical controllers like Cutoff Frequency, Modulation, Ribbon Control, etc.


There may be instances where you want to erase a certain controller from a track but not the entire track. For example, if you recorded a track with a lot of modulation wheel moves that you want to get rid of, but you like the track itself, you can use this job to delete only CC01 (Modulation) and nothing else. This feature is now available on in OS v2.5 under [Edit/Job]>[Song/Event]>[Erase Event]: 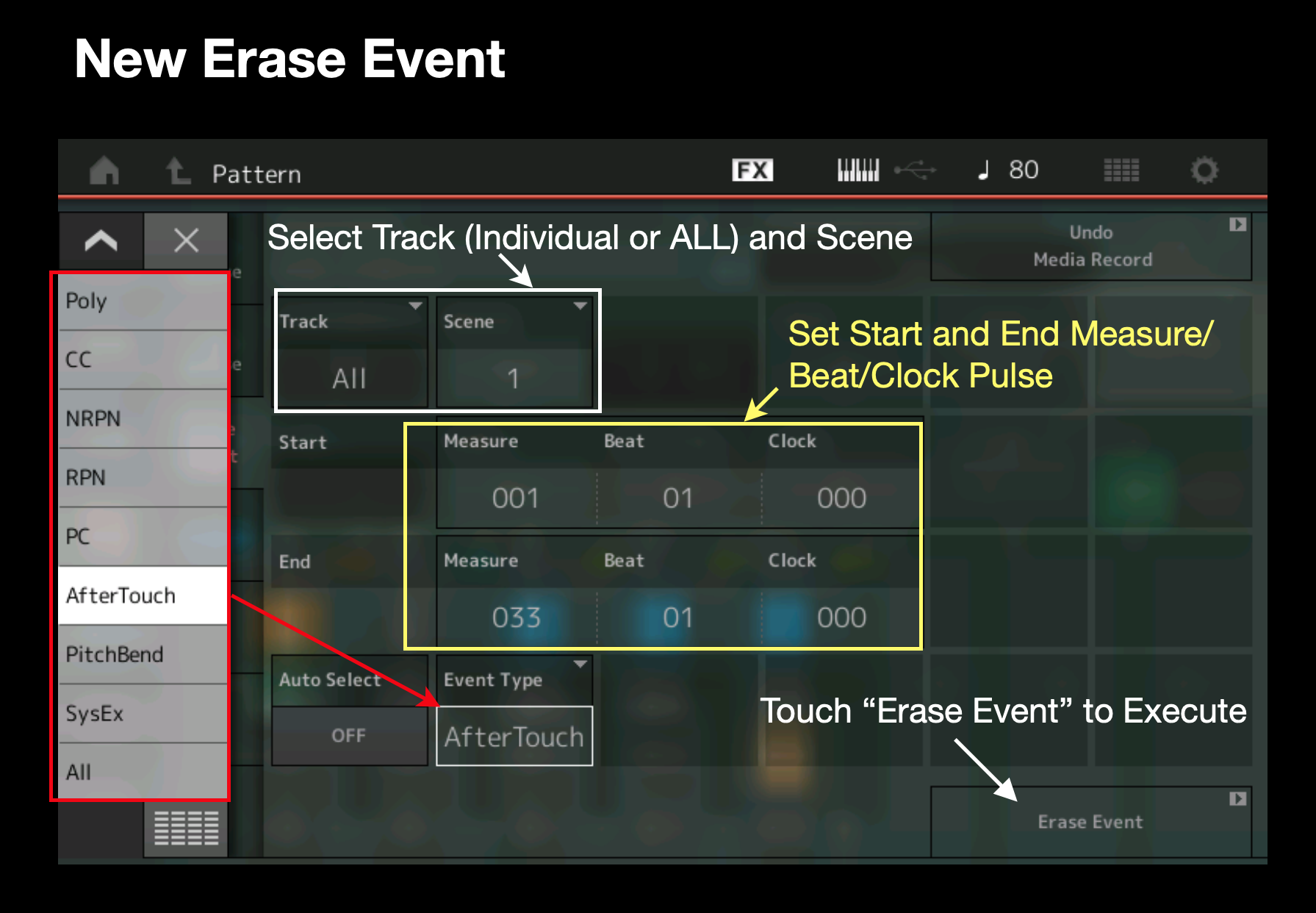 
The “Get Phase” job is a great way to grab tracks from MIDI Song and place them in a track of the Pattern Sequencer. Under OS 2.0 you could only select single tracks, so if you wanted to copy an entire arrangement to a Section of a Pattern you had to copy each track one at a time. This becomes cumbersome when you have multiple tracks you want to get. Under OS v2.5 you can get of all the tracks in a certain range and copy them to the Pattern Sequencer.


This feature is great when you want to try out different grooves over the same set of tracks. Here’s how you can accomplish this.

In this example I used the Scene 1 from the Pattern I recorded above and copied to Scenes 2, 3 and 4. To do this Touch [Edit/Job]>[Track]>[Copy] and Select “Track = All”, Scene 1 in the top row and “Scene 2” as the destination in the bottom row: 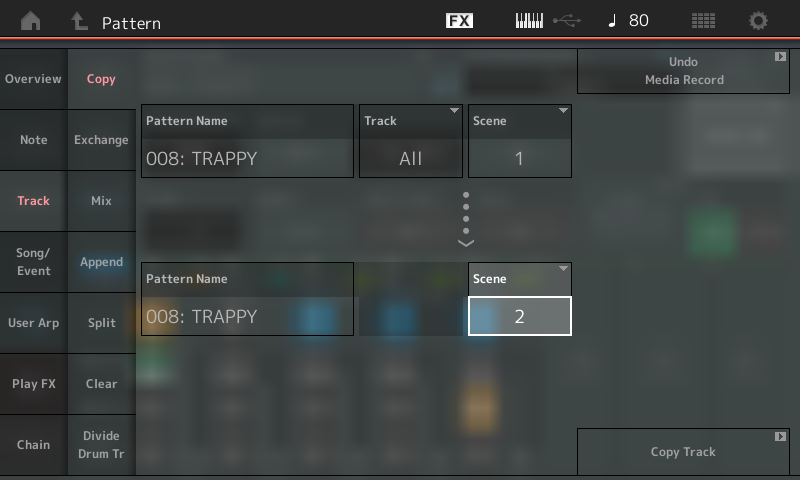 Scene 1 was auto quantized to the nearest 16th note for a tight straight time feel. For Section 2 I touched “Play FX” set the Swing Rate for each Track to +17 for a 16th note swing feel. To lock in that feel, I normalized the Play Effect for Scene 2 only. The other Scenes are untouched: 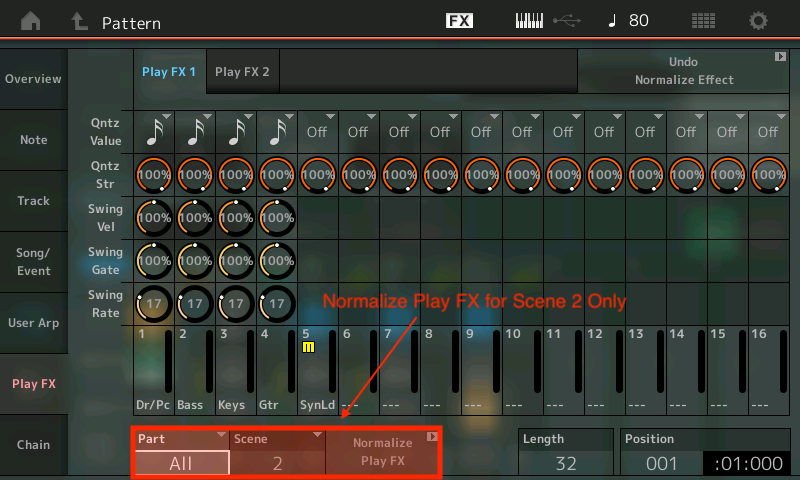 Now I have the straight time feel in Scene 1 and the swing feel version in Scene 2. For Scenes 3 & 4 I repeated the process by adjusting the feel with the Play FX then Normalizing each Scene. This is a cool way to try out different grooves during the Pattern recording process. 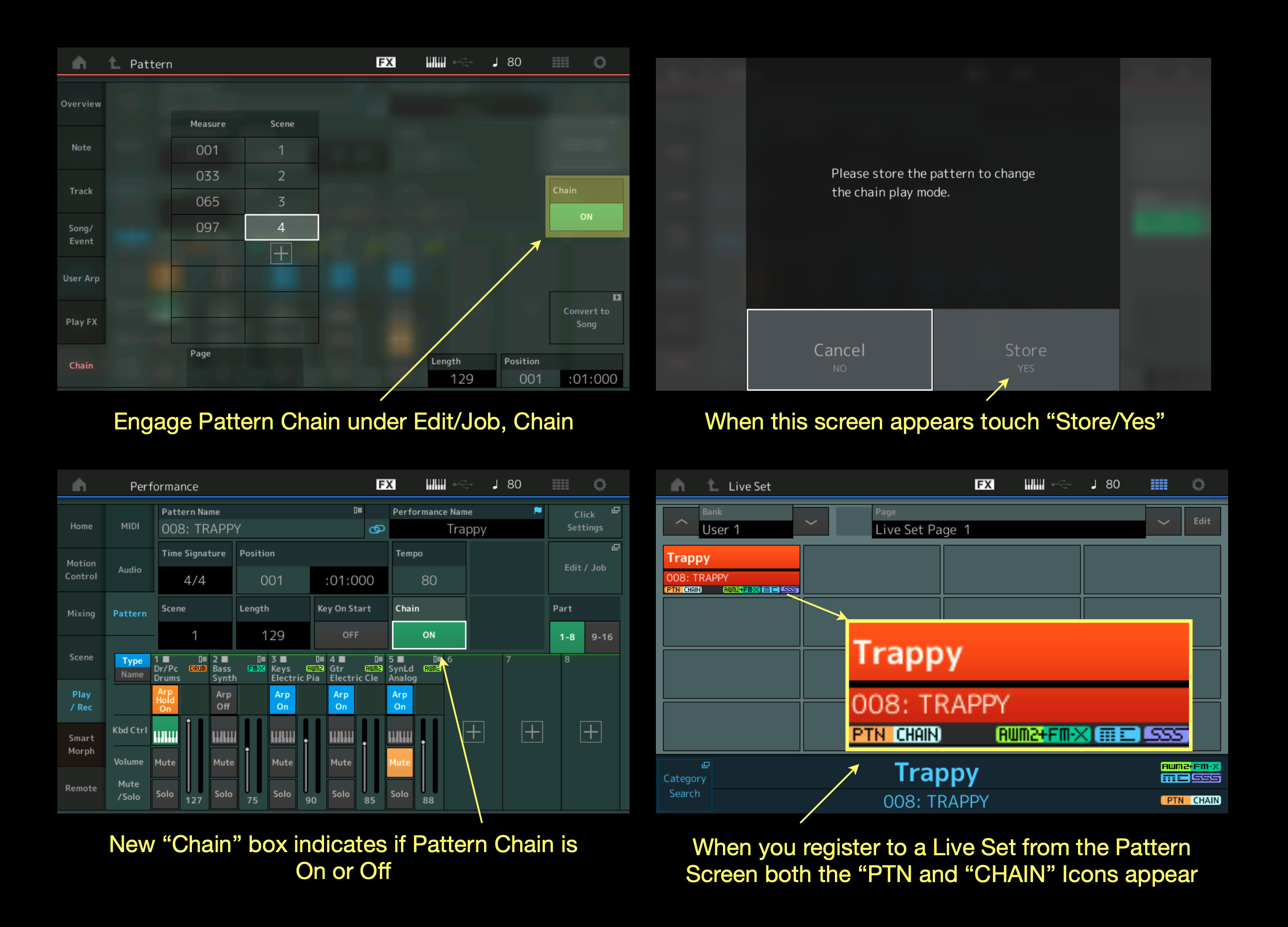 This new feature enhances the usability of the Pattern Chain by integrating control in the main Pattern Screen.

Undo/Redo on Each Screen

In the previous OS version, you could only find Undo/Redo of the last executed job on the the first page of the Pattern Edit/Job screen. Now Undo/Redo can be found on almost every screen in the Pattern Sequencer. This simple addition greatly enhances workflow: 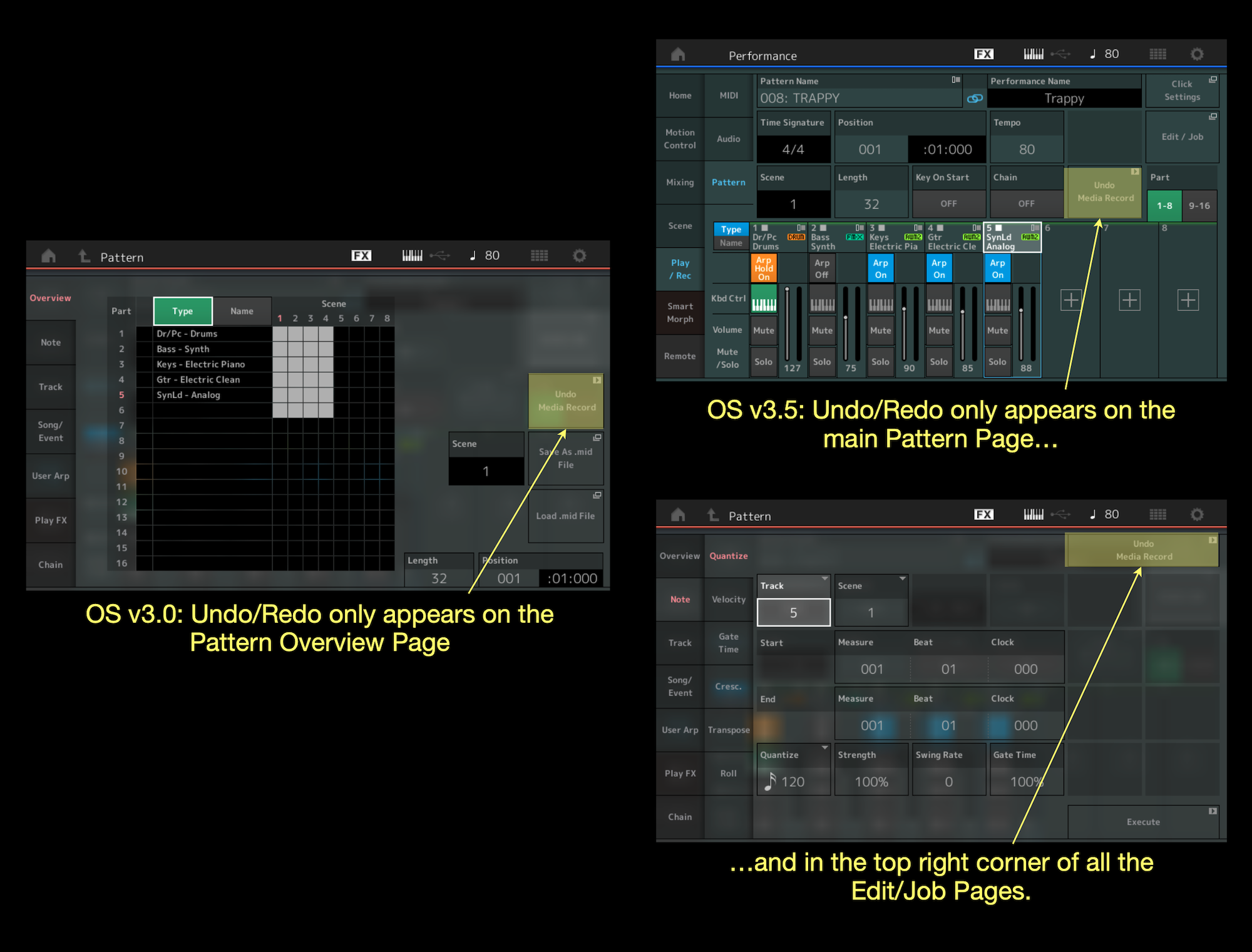 The new Pattern Recording and Workflow features added to MODX OS v2.5 are welcome additions to the Performance Pattern recorder. Update your MODX to OS v2.5 today to enjoy these new enhancements!

5 Reasons to Use Soundmondo with Dom Sigalas

5 Reasons to Use Soundmondo with Dom Sigalas

Ask.Audio: Unleashing the Power of MONTAGE (and MODX!)

Ask.Audio: Unleashing the Power of MONTAGE (and MODX!)

Behind the Synth: Close The Distance Chat NAMM 2020