A closer look at VCM Effects in the CP4: TouchWah and PedalWah

The CP4 features some authentic recreations of vintage stomp-box style effects using Yamaha’s remarkable VCM or Virtual Circuitry Modeling technology.  What follows is a closer look at the TouchWah and PedalWah effects.

I love the TouchWah and PedalWah effects in the CP4 Stage, especially when applied to Electronic Piano and Clav Voices.  Before diving into to these specific effects a quick overview of VCM (Virtual Circuitry Modeling) technology might be helpful.

There is a great definition located here on Steinberg’s website since they also utilize this technology in some of their plug in effects. VCM is described thusly:

“VCM was developed by an engineering group led by Toshifumi Kunimoto, a senior engineer who was also responsible for the first physical modeling synthesizers, VL1 and VP1. VCM enables an ultra-realistic digital reproduction of individual components in analog circuits, such as resistors and capacitors. Besides modeling the functionality of a circuit and the interaction between single components, VCM focuses on an unprecedented musical simulation of analog sound qualities…” 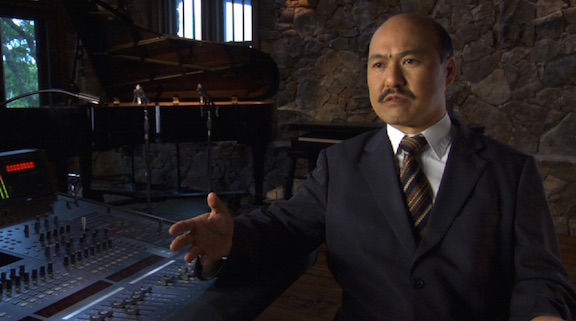 That’s a great definition, and each VCM effect accurately reproduces the warm and punchy analog quality found in classic preamplifiers, compressors, amplifiers, stomp-boxes and pedals. I’ll cover some of those in later articles but I’ll stick with the TouchWah and PedalWah effects.

Wah-wah Effects in Music Wah-wah effects are very cool and used R&B, Funk, Jazz Fusion and Pop. There is a nice definition of the history of the wah-wah effect here. The effect itself is generated by a filter that sweeps the peak response (the “Wah” sound) up and down in relation to some modulation input. In the CP4, that wah-wah, up and down motion is controlled by velocity in the case of the TouchWah effect or with the FC7 Foot Controller in the case of the PedalWah effect. You can also control the PedalWah filter sweep with the Modulation Wheel as well. The CP4 has a few preset Voices in the Clav Voice Category featuring Wah effects.

The Clav Voices in the CP4 are accurate simulations of the Hohner Clavinet™, a staple keyboard of choice in the music of many legendary artists. Some perfect examples of a Clavinet using a Wah-Wah effect can be heard in the songs “Tell Me Something Good” by Rufus and Chaka Khan and “Up on Cripple Creek” by The Band.  These songs just wouldn’t be the same without that wah-wah Clavinet sound! Let’s take a look at how you can achieve some similar sounds effectively in the CP4 with the TouchWah effect.

The easiest way to experience the TouchWah effect on the CP4 are the Voices found in the Clav Voice Category. After powering up the CP4, press the [CLAV] button found in the Voice Category section of on the right side then by moving the DATA wheel or pressing the [+1/YES] button select Voice “04:Clavi Wah”:

Play that Voice for a moment. The TouchWah effect is very cool and expressive and as you can hear, the filtering “wah” effect is generated by increases in velocity. As you play softly and gradually increase velocity you can hear how the "wah" effect of the filter changes in relation to your increased velocity.  In the Clav Preset Voice Category the Voices “04:Clavi Wah” and “08:ClaviMtWah” (The sound of a Clavinet with the mute engaged) utilize the TouchWah effect. Let’s take a look the TouchWah effect in detail. PRESS and HOLD the [PART EFFECT A] button located on the left side of the panel of the CP4 for a moment. That button has a small dot just to the lower right corner of the button which means “jump to edit” and allows you to jump directly to the effect parameters of the Main Voice: 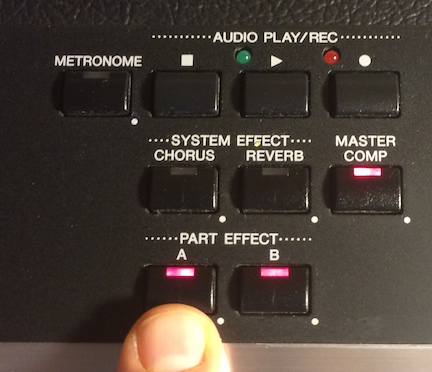 Press the [DOWN ARROW] button (between the [EXIT] and [ENTER] buttons) once and you will see this screen:

There are a few parameters here that can be adjusted to taste. The “Sens” parameter adjusts the sensitivity of the Wah: If you set it to “0” the filter is closed completely and no matter how hard you play it will stay in this closed position. Conversely, if you set the “Sens” parameter to “127” the filter is wide open. The default is 71. This allows the wah sound to really sound great in the lower and middle part of the keyboard…you’ll notice the wah sound closes down as you play up the keyboard. If you adjust this setting upward from 71 you should notice that the filter opens more in the upper range of the keyboard; adjusting down from 71 closes it down. Play middle C repetitively with the same velocity and use the data wheel to adjust that parameter…You will hear how the filter moves.

I personally increase that setting when I have some higher register riffs I want to play but I like where the default setting is placed for the most part. The next two parameters, “Bottom” and “Top”, refer to the range that the filter operates within. Changing the Bottom parameter changes how open the filter is from the key-on, with 0 being closed completely and 127 being open completely. The Top parameter changes top point of the filter setting. These two parameters act like a “velocity compressor” for the TouchWah effect. For example, if you were to set the Bottom and Top Parameters both to “0”, the filter is completely “closed” resulting in no “wah” sound; if you were to set the parameters both to 127 the filter is completely “open” and, again, you hear no “wah” sound. It is the ratio between the Bottom and Top that provide the greatest range of the TouchWah effect, so the default settings of 0 for Bottom and 127 for Top provide the maximum velocity range for the TouchWah. Press the [DOWN ARROW] button again to see this screen:

These two parameters, “ResoOfst” (Resonance Offset) and “Drive” are the most important parameters to adjust to tailor this effect and the two I regularly go to to increase the “wow” and drive of the TouchWah effect. You can adjust the “ResoOfst” parameter from “-12.0” to “+12.0” and the Drive from “0dB” to “+40dB” Both of these parameters will really change how powerful the effect can get. There is quite of range for you to work from here…the default settings “0.0” for ResoOfst and “0.0dB” for drive still give you the effect but these are really conservative.

You can truly make this effect amazingly powerful by adjusting these two settings and the audio files below illustrate that. The musical example below features two performances of the same brief audio example.  The first time it is played with the default settings for the Voice “04:Clavi Wah” and the second time I increased the “ResoOfst” parameter to “+9.0” and the “Drive Parameter to “+16dB”.

It is quite a difference! Using TouchWah on Other Voices TouchWah can be applied to any Voice, and I really like to use this effect on electric piano Voices. I edited the preset Voice “04:78Rd II” in the CP4 and applied the TouchWah effect to that Voice. Here is how you do that:

The default effect for this Voice is “EQ 501”, a VCM generated EQ that simulates a vintage boutique analog EQ. Using the [DATA] wheel, until you see the “Ctg” (category) change to from “MSC” (miscellaneous) to “MOD” (modulation), then select “TouchWah” under “Type”:

Quick sidenote: Why did I choose Part Effect B and not Part Effect A? My reasoning is this: Part Effect A uses the PreAmp effect “78Rd II”, a VCM simulation of the preamplifier for this type of tine piano. To view this effect, PRESS and HOLD the [PART EFFECT A] button:

This is an important part of the sound of this preset Voice and I wanted to keep that effect as is. I’ll cover the PreAmp effects in the CP4 in a later article.

4. As with the Clavi Wah Voice I like to increase the amount of “ResoOfst” and “Drive” for this effect. I also find that increasing the “Sens” parameter up to around 85 gives me more of the TouchWah effect in the upper registers. Here are my TouchWah effect settings for this Voice:

Related to TouchWah is the PedalWah effect. To use this effect requires the purchase of the Yamaha FC7 foot controller. I love this effect because you can effectively simulate the “wacka-wacka” funk style of a wah-wah pedal in a rhythmic way. The quickest way to check out this effect is dialing up the preset Voice “Clavi PWah” with the FC7 Foot Controller connected:

2. Press the [CLAV] button in the “Voice Category” section of the CP4 and, using the [DATA] wheel, navigate to the preset Voice “11: Clavi PWah”:

5. Press [ENTER] the use the [DOWN ARROW] to get to the second screen to see the control destination of FC2 (Foot Controller 2):

Note that, under “FC2”, you see “EffA(+)”, meaning that pressing the FC7 foot controller “toe forward” like an accelerator pedal will open up the filter of the PedalWah effect. As I talked about above, you can jump directly to the PedalWah effect parameters.

6. PRESS and HOLD the [PART EFFECT A] button to the left of the display:

7. Use the [DOWN ARROW] button to check out the parameters below.  Here is the first page:

I usually like to keep the “PdlCtrl” (Pedal Control), “Bottom” and “Top” parameters exactly where they are so I can get the maximum range of the effect from the pedal but these can be set to your preference. The “PdlCtrl” parameter is actually something to experiment with. Set your FC7 to its lowest point (“heel back” as opposed to “toe forward”), navigate to this parameter with the [ARROW] buttons and play a single note without touching the FC7 while increasing the amount of the “PdlCtrl” parameter.

You can hear the Wah filter slowly open as you increase this thereby increasing the starting point from where the wah effect can be controlled using the FC7. If you set it to the top point of 127 the Wah filter will be wide open and the pedal will not "affect the effect". I sometimes like to set this around 30 so I have it a bit open then increase from that point with the pedal, especially with electric piano Voices. With the Clav sound I generally keep it at 0 so I have biggest range.

8. Press the [DOWN] arrow button again to see the next page below:

This page has the exact same parameters that are found on the TouchWah effect with the exact same ranges (“-12.0” to “+12.0” for “ResoOfst” and “0dB” to “+40dB” for “Drive”) and, as with TouchWah, I like to increase those ranges for a more resonant and driven wah sound:

Last thing about PedalWah: There is some skill to effectively play a PedalWah part that sometimes requires practice to get the timing of keystrokes and pedal movement dialed in. As with lots of things in musical performance, you may have to work with it a bit to feel comfortable. Experiment with these effects! Both the TouchWah and PedalWah are great effects that can really add some great funkiness to your music.

You can tell us about it or ask questions in this forum thread.
Tweet

Understanding Performances in the CP4/40

Editing and Creating Performances in the CP4

CP4/40 Quick Tip: The Key Off and Strike Position of an Electric Piano Voice