My Voice sounds different when I move it other Modes, how can I get it to sound "exactly" the same?
A Step-by-Step Tutorial
Skills Learned


Scenario: You have found a Voice that you like and it has assigned arpeggios (five different arpeggios can be associated with a Voice). You want to use the Voice and its assigned arpeggios in a Pattern/Song Mix or perhaps in a Performance with other Voices. What you discover when you place a Voice into a PERFORMANCE or you use it in a MIXING setup, it might sound different from it did in Voice mode.

When you assign a Voice to a Pattern/Song MIX or to a Performance certain of the data is stripped off and reassigned to a default setting. This can cause the sound to be quite different from what it was in VOICE mode. This is due to a reallocation of Effect processing resources and like any signal going to a channel of any mixer (combines various signals) the channel has some default /nominal settings.

Some of the things that can change include:

Think of the Voice in VOICE mode as being a single musician with a small setup. Think of the PERFORMANCE and MIX as a band of musicians with a mixer - some of the settings on a channel of the mixer will automatically be zeroed out because the mixer is there to combine and blend multiple musicians. So a Voice will no more sound the same in a Performance than a single musician would sound the same when they join a band.

If you wish to copy Voice mode settings, like the arpeggios, System Effects, and the others, to the Voice’s PART of the MIX follow this step-by-step tutorial.

Let’s assume you want to build a Pattern around this particular Voice. First, let’s learn how to explore this Voice and see what it has going for it. To learn about any Voice from the main screen press the [F6] EFFECT then the [SF6] INFO button. 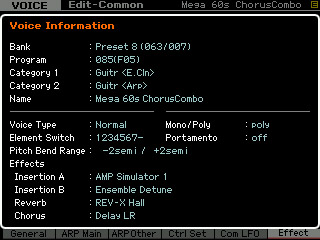 This guitar sound is in Bank MSB/Bank LSB 063/007 – that’s the Preset 8 bank. This Voice is made from seven different Elements. An Element is a multi-sample - and can represent an instrument or component that makes up an instrument sound.

This particular arpeggio Type #2179, is a “FA” Fill-in, genre is “Jazz Pop”, the “XS” means that no matter where across the keyboard you voice the chord, the resulting guitar rhythm will come out voiced in the range a guitar would be able to play.

Because we are curious and there is no better way to learn than to explore…let’s see what makes this Voice tick. If you press the [EDIT] button and navigate to the Control Sets you can view what assignments have been made. You will be able to use these assignments once the Voice has been placed in a MIX so let’s be aware of what they are. From the main Voice screen: 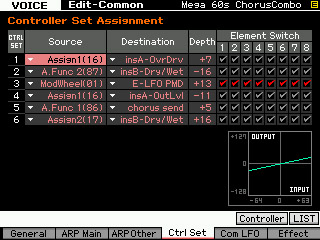 All of the CONTROLLER SETUP ASSIGNMENTS will be active when you move the VOICE to a PART, be it a PART of a PERFORMANCE or a PART in a SONG MIXING or PATTERN MIXING program. Your controller assignments will work just as they do in VOICE mode because they are a part of the Voice data. 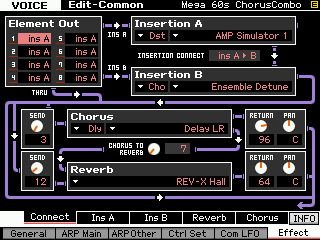 When we place this Voice in either a Performance Part or a Mixing Part, as mentioned, some of its assigned parameters will be changed, reset or stripped off completely. Voices are placed in a somewhat neutral state as you are going to combine them with other Voices. A Voice played alone in VOICE mode, is very much like an instrument in a specific practice room - one where it is the only instrument sounding - it has free reign over all the available effect processing. However, when you take that individual instrument and place them in an ensemble or band (which is what you are doing when you combine it with others in a PERFORMANCE or a MIXING program), it can have some of its own effects of course, but it must share the room acoustics (the Reverberation chamber and the Time Delay effects) with the rest of the instruments in the ensemble. In other words, when you are home in your practice room (VOICE mode) you could be the only instrument in the room, when you join the band (go to a rehearsal studio or recording studio) you now must share the room with other instruments.

A PART is an important concept to understand. It is defined as a Motif XS/XF Voice that has been placed in a Performance or a Mix – it is the set of parameters that are assigned to control the Voice – they are offsets to the actual Voice parameters. So when you save a Performance or a Mixing you are actually not saving the Voice data itself but these set of parameters that are now associated with the original Voice. This allows you to edit the PART without destructively editing the Voice data itself. What this accomplishes is you can use the same Voice in other Performances and Mixes completely uniquely - without having to create a new version of the VOICE that needs to be stored elsewhere in VOICE mode. Next we will learn about how to have the PERFORMANCE or MIXING program “copy” some of the additional data that would normally be stripped off of the VOICE to a multi MIX and then how to “copy” it to a PERFORMANCE.

“Parameter with Voice” for some settings / COPY Job for other settings
As mentioned when you move the Voice into a Performance PART or into a Mixing PART you will notice that the Reverb and Chorus assignments are set to the default (Rev-X Hall and Modulation) types, These are to be shared by all PARTS via a SEND/RETURN situation similar to what you find on any professional mixer or recording console. Each PART has a SEND amount control, letting you, like the engineer, send a certain amount of each Channel to the effects connected to the console. Additionally, when a VOICE is placed in an ensemble, the associated arpeggios are removed. To restore the arpeggios, we will use the convenient function called “Parameter with Voice” - which literally allows some of the programming that normally would be removed to come to the new program “with the Voice”. Please the short article “Parameter with Voice” for details of what gets copied.

Recalling the INSERTION EFFECTS of a VOICE is easy: Activating the INSERT FX SWITCH restores the Insertion Effect but to restore the SYSTEM EFFECTS we will use the convenient COPY JOB function. But you must recognize that only one setup of room acoustic (SYSTEM EFFECTS) can be shared by the ensemble. It is impossible as it would be in real life, for each musician to bring his/her own home room acoustics to the ensemble. Think of the ROOM ACOUSTIC effects (SYSTEM EFFECTS) as those that recreate the room in which the entire ensemble is appearing. This is why you sound different when you go from VOICE mode to a PERFORMANCE ensemble or to a SONG/PATTERN MIXING setup. Here’s how to make it work for you:

Initialize the Mixing or the Performance you wish to use (this process will work equally well for each). Initialize is a [JOB] found always at [F1].

Then set the VOICE you want to this PART… by moving the cursor up and using the BANK and NUMBER options or [CATEGORY SEARCH]. 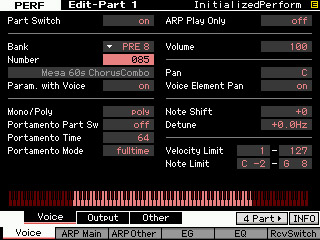 The act of activating “Parameter with Voice” prior to setting the VOICE in place will automatically copy some of the functions stripped off normally. This is your choice. There is no real help from the operating system to make a VOICE sound like it does in VOICE mode… you may wonder why? Because just like on any mixing console that deals with multiple channels, the goal is to get the VOICE or individual input to sound GOOD in its current situation - not worry about what it sounded like when it was played alone - it is no longer going to be played alone!!! You can understand the ARPEGGIOS not being automatically brought along, because you can assign any of the more than 6000 arpeggios to the VOICE, you are restricted to just the 5 that were attached to it in VOICE mode. If you want the arpeggio parameters to go along with the Voice to your PERFORMANCE or MIXING you have to “OPT IN” by setting the “Parameter with Voice” function to ON prior to selecting the Voice for the PART.

How to Copy the SYSTEM EFFECTS:
• Press [JOB]
• Press [F3] COPY
• Press [SF2] VOICE
• Set CURRENT MIX
Select the PART that contains the VOICE whose SYSTEM EFFECTS you want to COPY into this MIXING. If the VOICE is currently in PART 1, set PART 1 and mark the attributes of that VOICE in VOICE mode that you wish to use here. Mark the REVERB and CHORUS.

• Press [ENTER] to execute.
This will Copy the REVERB and CHORUS setting from the VOICE in PART 1 to the current Mix. Take note that when you copy the Reverb and Chorus to the current Mix, all the Parts will now use these effects as they become the SYSTEM Effects for the entire Mix.

Now when you return to the main SONG or PATTERN screen you will have all five Arpeggios that were associated in Voice mode associated with this Mix. And the Reverb and Chorus algorithms of the “Mega 60s ChorusCombo” Voice are now the System Effects of this Mix

In our example select the “Mega 60s ChorusCombo”.

This will Copy the ARP settings from the VOICE in PART 1 to the current location.

Select the PART that contains the VOICE whose SYSTEM EFFECTS you want to COPY into this PERFORMANCE. If the VOICE is currently in PART 1, set PART 1 and mark the attributes of that VOICE in VOICE mode that you wish to use here.