Envelopes define the shape of a sound, find out how your synthesizer works.

LEARNING ABOUT ENVELOPES
Whenever questions arise about the use of and the behavior of the sustain pedal, it inevitably leads to a discussion of the Amplitude Envelope Generator. This is a technical term, also referred to as AEG, and is the way the synthesizer describes how the LOUDNESS of the sound changes over time. Basically, how a sound starts, continues and disappears. You can see how the introduction of the sustain pedal can alter the length of time that a sound might last.

Let’s start this discussion with a few observations. There are only a precious few musical instruments that actually have ‘sustain’ pedals. The sustain function in MIDI is designed to mimic its most common instance, on the acoustic piano. And as you already know, it is not really infinite sustain on a piano - the sound of a piano does ultimately stop, in spite of you holding the pedal down… By the end of this article hopefully you’ll have a better understanding of why the sustain pedal works differently on different Voices.

Piano is a percussion instrument. It is because of the way its envelope behaves when the instrument is played. A hammer strike causes a string to go in motion, there is a percussive ATTACK. The sound immediately dies down some, initial DECAY, and if the key is held or if the sustain pedal is engaged the felt damper is held away from that string so the string continues to vibrate (SUSTAIN)… and finally when the key is released or the pedal is disengaged the RELEASE portion of the envelope takes over.

However, with percussive family instrument, no matter what, the sound will eventually return to 0. Even if you held the sustain pedal indefinitely, the sound will eventually stop. In the real world this is due to friction from the air, and the pull of gravity that eventually cause the string to stop vibrating.
The sustain pedal can only HOLD sound indefinitely if the AEG is programmed such that the envelope (level) does not reach a 0 value before the RELEASE state.

So how a sustain pedal works on a piano is going to be radically different from how it works on an organ. Try it out.

The AEG (Amplitude Envelope Generator) consists of the following components:

These are the parameters that the synth uses to describe what in old analog synthesizers was referred to as the ADSR (Attack-Decay-Sustain-Release). It uses a series of TIME and LEVEL settings to describe the loudness shape of the sound. 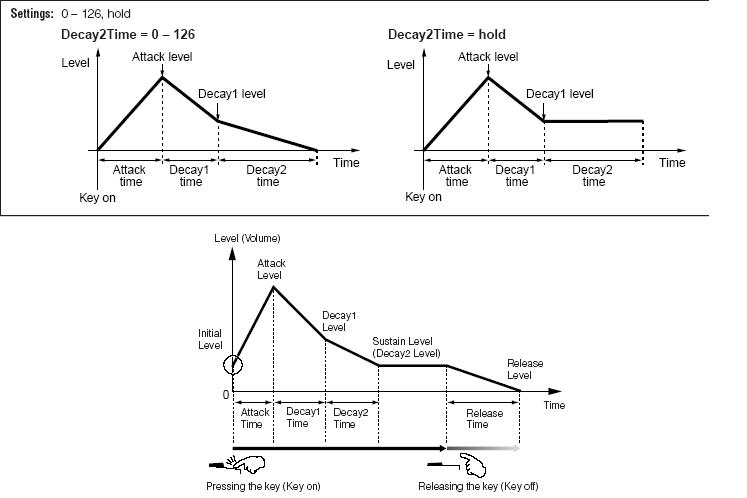 In the third screenshot, you see a typical musical (Non-Drum/Percussion) instrument described.

By the way: RELEASE LEVEL is always going to be 0 (that is why the parameter is not included).

So if DECAY 2 LEVEL is 0, (as it is on a piano) you can delay the eventual return to level = 0 with the sustain pedal or by holding the key… but it will come eventually. Of course, if you do release the KEY at any time in the envelope, the sound proceeds directly to the RELEASE TIME>

RELEASE TIME on a piano is not immediate - you don’t often appreciate it until it is wrong. But there is a definite slope to how the sound disappears - if you set the RELEASE TIME so that is too fast, it is just not comfortable. If you set it so it is too slow, it is not right either. Experiment with a PIANO Voices Release time and you’ll hear immediately what I mean.

The AEG in these types of instruments will very rarely have DECAY 2 LEVEL at 0… because they need typically to continue to sound as long as the key is engaged (the key being engaged is how you apply the “pressure"). This does not mean you couldn’t setup a String Orchestra sound that ‘behaved” like a percussion instrument… it is just that most strings sounds are programmed to be “bowed” (continue the vibration) along with how/when you hold and/or release the key.

If you engage a sustain pedal on a sound that DECAY 2 LEVEL is NOT equal to 0 - the sound will be maintained (forever) at the DECAY 2 LEVEL.

If you engage a sustain pedal on a sound before it reaches output level of 0, and the DECAY 2 LEVEL is not 0, the sound will be latched at the level it has reached thus far

Remember an envelope develops over time. Therefore, if you lift the sustain pedal, (KEY-OFF) the sound jumps immediately to the RELEASE TIME portion of the envelope… If you re-engage the pedal before the sound reaches LEVEL = 0, the envelope will be latched at the level it has reached.

You have instructed the sound to start to disappear but before it has completely you have given it an instruction to hold. In order to perform what you are attempting you must adjust the RELEASE TIME parameter of your sound so that you are not interfering with your retriggering.

There is no so-called “normal” way for sustain pedals to work on SELF-OSCILLATING family instrument sounds - as there is no real world equivalent. You have to synthesize it for you own purposes. Understanding how synthesizers emulate instruments is an important area of programming.

Shorten the RELEASE TIME parameters to fit your performing style on the particular musical section you are trying to reproduce. Try lower values for RELEASE TIME -the amount will vary according to how quickly you need the notes to disappear before you re-engage the pedal.

At left, a view of the Envelope… time moves left to right and volume is up and down. You can see where KEY ON is and you can see where KEY OFF is. If you play a long note the entire envelope will play out according to the settings. If you play staccato (key-on and key-off are closer together in time) a portion of the envelope takes place and as soon as KEY-OFF is received the RELEASE TIME take over to return the LEVEL to 0.

Hope that helps you picture what is going on.