Based on a virtual analog synth engine the CS is a completely new and unique synthesizer. We'll take a look at what's available and get started with making sounds.

Based on the OSCILLATOR-FILTER-AMPLIFIER paradigm of so called "voltage controlled" analog synthesizers, we can begin to discuss how sounds are made. The oscillator is the tone source, the filter is where we can change its tone (timbre) and the amplifier is where we can control its loudness.

If all the sliders are down (at minimum) you will hear no sound, but simply raising them all will not create a sound for you either. The front panel is "live" so let's begin with a quick tour, because whether you are a synth veteran or brand new to synthesis, there are some things you have likely not encountered here.
The following parameters can all be controlled by standard MIDI cc (Control Change) messages:

What a particular control parameter will do will greatly depend on the selected SOURCE OSCILLATOR WAVEFORM - there are 5 source waveforms. The parameters TEXTURE, MOD, and what happens when the LFO is set to OSC is discussed below: 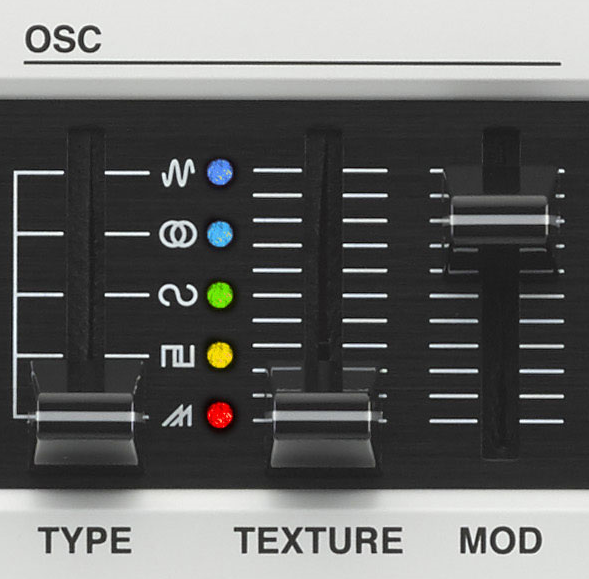 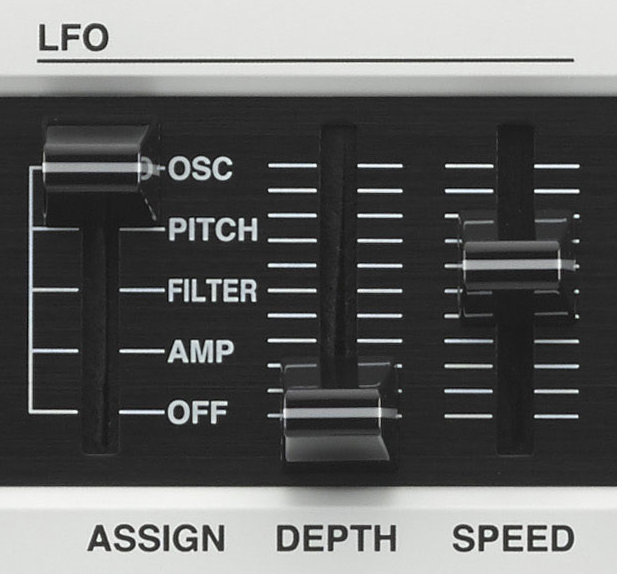 When MultiSaw is the OSC wave, 'Texture' controls the output level of Oscillator 2; 'Mod' at minimum renders a single sawtooth, as you raise this you get a thicker multiple sawtooth source wave. When LFO is set to 'OSC', it will be applied to Oscillator 1 only. 'Depth' and 'Speed' apply the change.

When Pulse is the OSC wave, 'Texture' controls the pitch of Oscillator 2; 'Mod' at minimum produces a square wave, the width pulse narrows and sound is more nasal as you increase level. When LFO is set to 'OSC' it creates PWM (pulse width modulation). 'Depth' and 'Speed' apply this change.

When Ring Modulation is the selected wave, 'Texture' control Oscillator 1's pitch, 'Mod' controls Oscillator 2's pitch. When LFO is set to 'OSC' the 'Depth' and 'Speed' are applied to Oscillator 2. Classic ring modulation tone is derived from the sum and difference of the oscillator tuning. 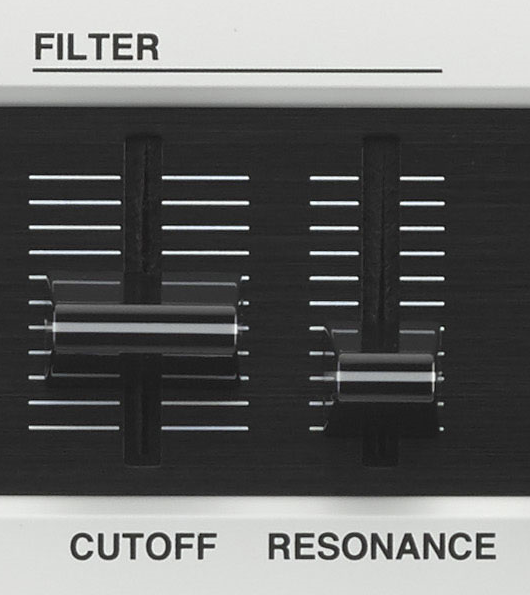 FILTER RESONANCE - creates a peak at the cutoff frequency making it more prominent than all others.
Hint: Too much resonance can cause the sound to howl, use with some discretion (or not). 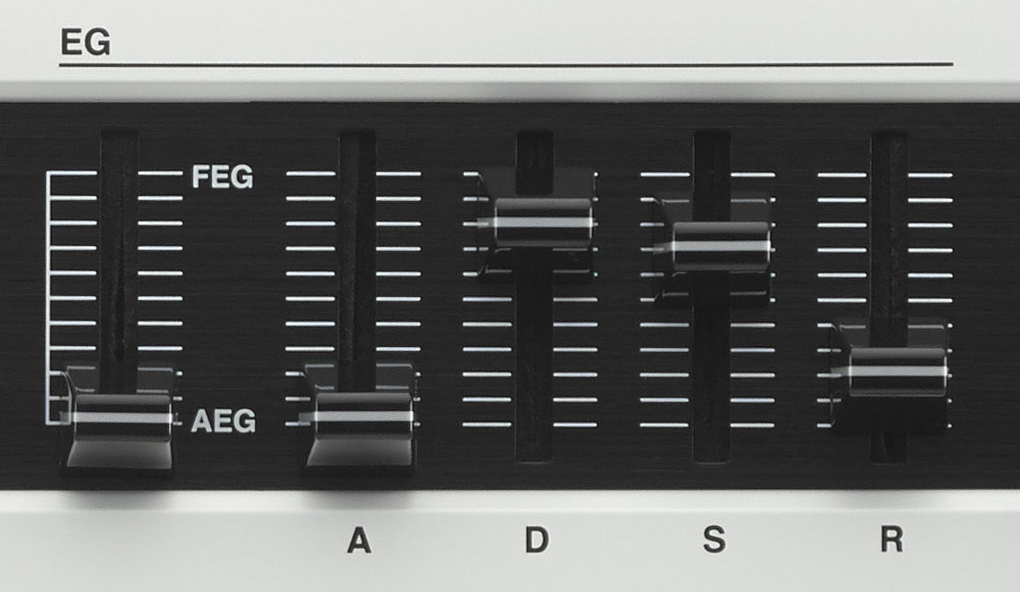 EG slider biases the Envelope towards the filter or the amplifier output.
Hint: Set the location toward FEG or AEG by ear.

ADSR - set 'A' (Attack) to minimum position to use keyboard to start sound at note-on. Raise this to slow down initial rise in volume. Raise 'D' (Decay) to allow sound through. This is better understood as "initial decay" and represents the drop in volume after the attack raises the Volume to maximum. As 'S' (Sustain) is raised higher than 'D', you will notice that holding a key will allow sound to continue as long as the key is held. If 'S' is lower than 'D' sound will eventually disappear even if you continue to hold the key down. 'R' (Release) engages when you release the key. The higher the 'R' the longer the sound takes to stop after key off.
Hint: If all the ADSR sliders are down, you will likely only hear a "click"... immediate attack, immediate release and no decay or sustain. Raise the 'D' and/or the 'S' slider to allow the envelope to breathe a bit. Percussive sounds have very little sustain - again sustain is how the sound behaves while your finger continues to hold the key.