Welcome to the fourth article in the Manny Fernandez FM-Xplorations series! A longtime FM programmer who contributed sounds to the DX7II, SY77, SY99, FS1R, DX200 and reface DX, Manny has lots of tips and tricks to share in this highly informative series. So let's join Manny now . . .

We’ll continue by deconstructing a finished Performance based on an earlier example (see bottom of article for links to earlier lessons). Go back to our Live Set “Manny FMXplr” and select the Performance “Manny Slow PWM Pad”. This has ‘polished up’ the PWM base pad from our example Performance into a lush analog style pad emulating a slow pulse width modulation from a 50% square wave to about a 20% pulse. Mod Wheel and Aftertouch control the vibrato/pitch modulation.

First, let’s review the Assignable Knobs. As part of the polish in this Performance, I’ve programmed control of some core FM-X parameters to allow for useful & easy real time tweaks of the sound:
- Knob 1 for Carrier Ratio, stepped control of integer ratios of 1.00 to 8.00;
- Knob 2 changes the Carrier waveform;
- Knob 3 for Modulator Index (Modulator Level), which emulates the ‘pulse width modulation’ depth and is best between 40-80;
- Knob 4 for Modulator Ratio, continuous fine frequency control of ratio from 1.00 to 2.00;
- Knob 5 for integer stepped Modulator Ratio from 1.00 to 8.00; and,
- Knob 6 for Carrier Resonance, which will only have an effect when the Knob 2 position selects the Res1 or Res2 waves:

The Performance will load with Scene 1 as the default scene. Play and hold a chord and as in our first example above you’ll hear the sound slowly modulate back and forth from a square wave to pulse timbre. This time I’ve created the PWM effect using Part Motion Sequence Lane 1 Sequence 1, again controlling Modulator Level: 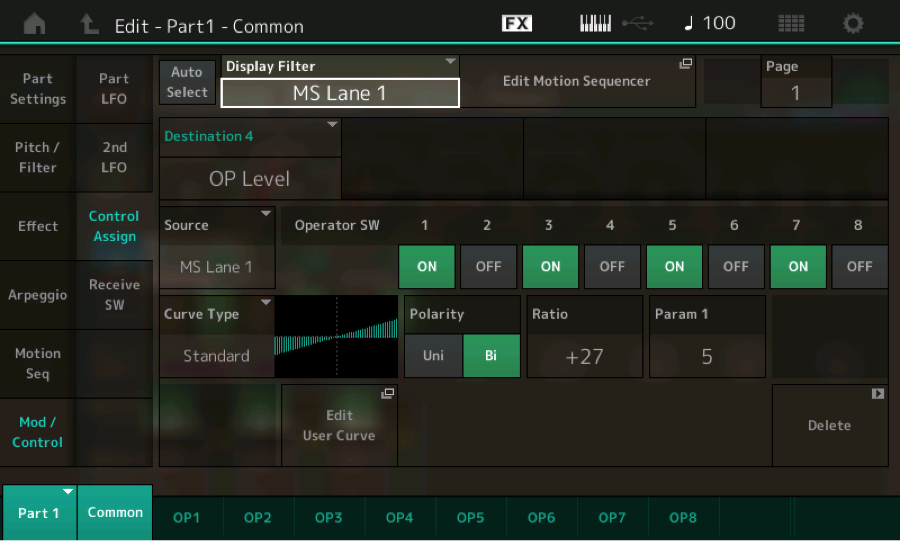 As before all the Modulators are set to the All 1 Wave with a Skirt of 4 and the default Carrier Wave setting of Odd 1 with a Skirt of 6. BTW - to more clearly hear the various components as we walk through this example, press Assignable Switch 1 which I’ve set up to bypass the Effects. The Motion Sequence is set up as a triangle wave shape and is synced to Tempo. However, note that the Unit Multiply value is set to 1600%, which means our triangle wave speed is16 times slower than the Tempo setting of 100 BPM: 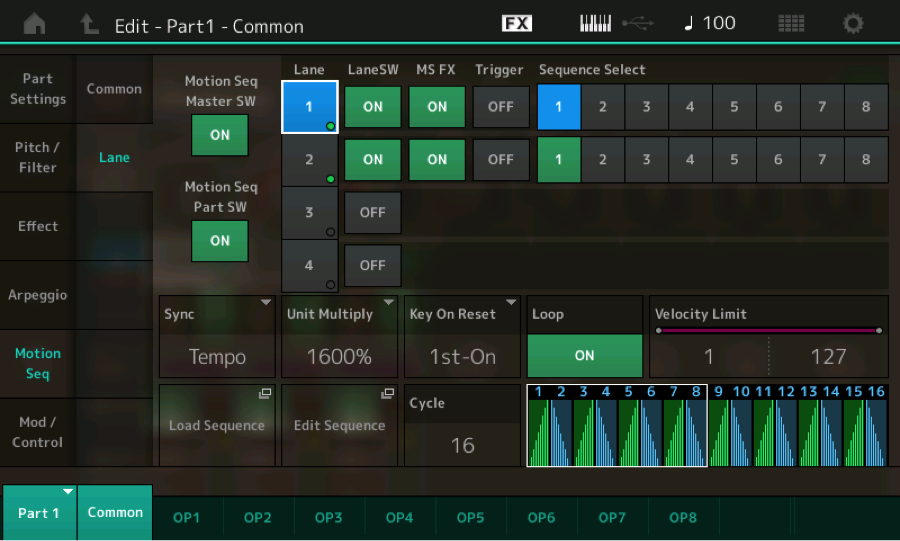 Next I’ve incorporated Scenes to call up different Lane 1 Motion Sequences to change the shape and behavior of the PWM effect. Scene 2 plays sequence 2, which does the PWM effect twice as fast with a sinusoid wave shape using Pulse A set to the Bell shape with Prm1 value set to 5 and Prm2 value set to 2: 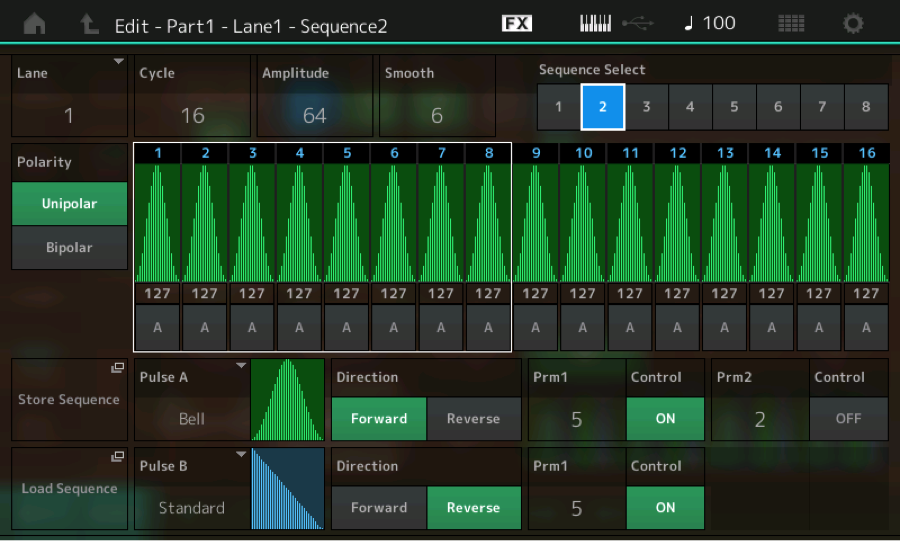 Scene 3 selects sequence 3, which plays the PWM effect 4 times faster, again with a sinusoidal wave shape. Note the Pulse A Discrete Saw shape uses a Prm1 value of 6 and Prm2 value of 4 to change the saw shape to four square pulses, then to ‘round’ them off I’ve set the Smooth parameter to 80 reshape them to a smooth sinusoid shape: 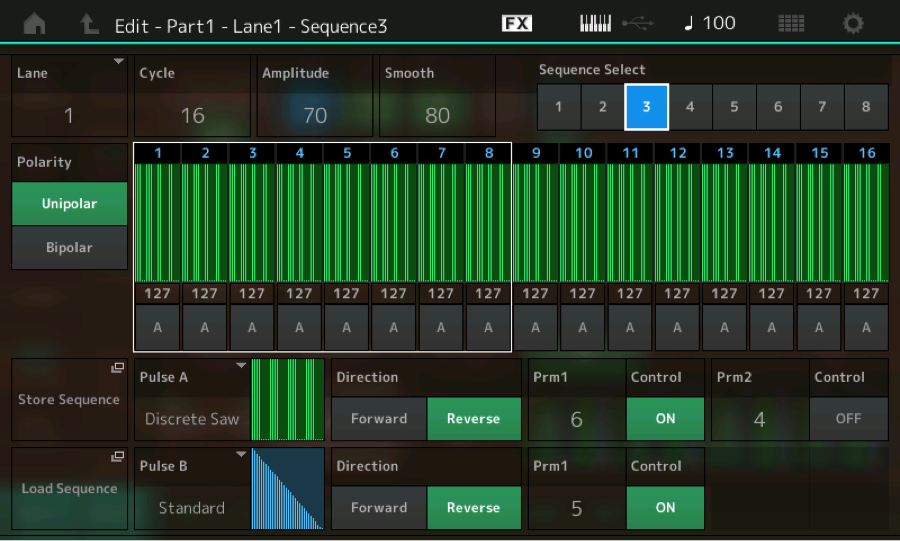 Scene 4 again plays the PWM effect twice as fast, but instead of the smooth wave shape modulations of sequences 1-3, this time I’m using a square wave shape for the PWM effect using sequence 4. Using a Prm1 value of 2 and a Prm2 value of 4 for the Pulse B Discrete Saw makes the ‘double square’ shape: 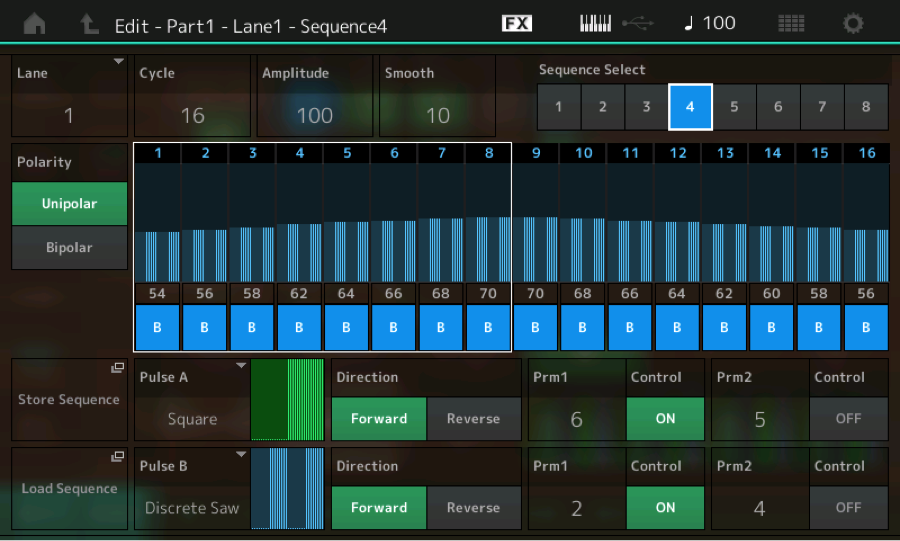 Then Scene 5 plays the square wave shaped PWM effect 4 times faster, so I’ve re-tweaked the Prm1 & 2 Values for the Pulse B Discrete Saw shape, but with Smooth set to Zero so it keeps the discrete square character: 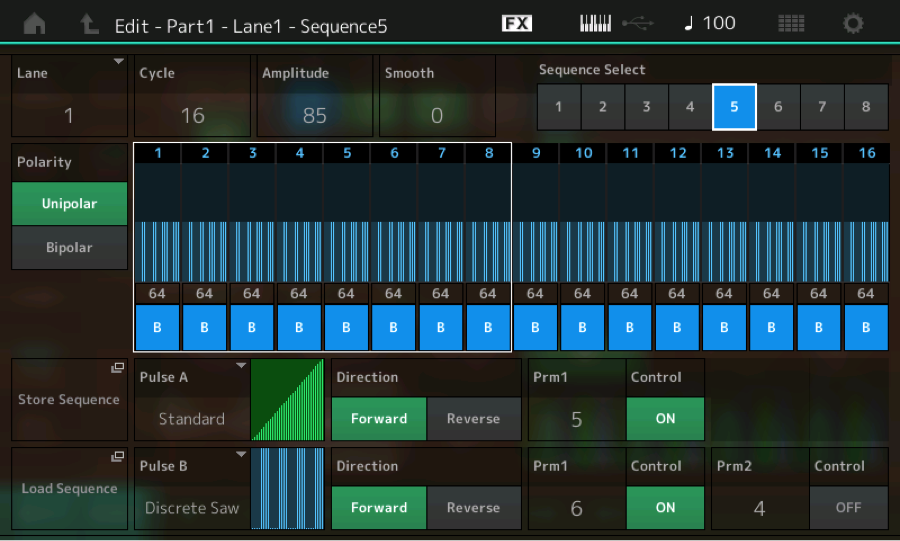 Again, to hear the modulation more clearly, toggle the effects off/on with Assignable Switch 1. This is a useful application of a Motion Sequences and Scenes to create an many different LFO types of timbre changes in our sound, and still have the actual LFO to use for Mod Wheel and Aftertouch vibrato. Now we’ll go just below the surface and look at Scenes 6 – 8. As introduced in our previous article, I’ve set each of these Scenes to have a different ‘preset’ stored settings for Knob 4. By linking it to the SuperKnob and then storing the SuperKnob value in the Scenes: 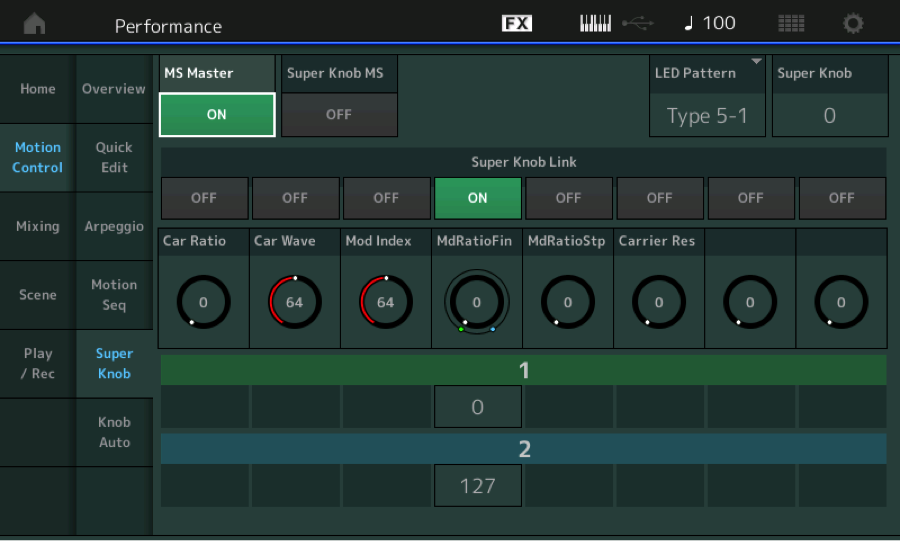 Knob 4 is the continuous control of the Modulator frequency from a ratio of 1.00 to 2.00. Select Scene 6 and play and hold some notes. You will hear that the fast square wave shape PWM effect now has a strong inharmonic timbre as it pulses in and out, due to the Knob 4 stored setting of 53: 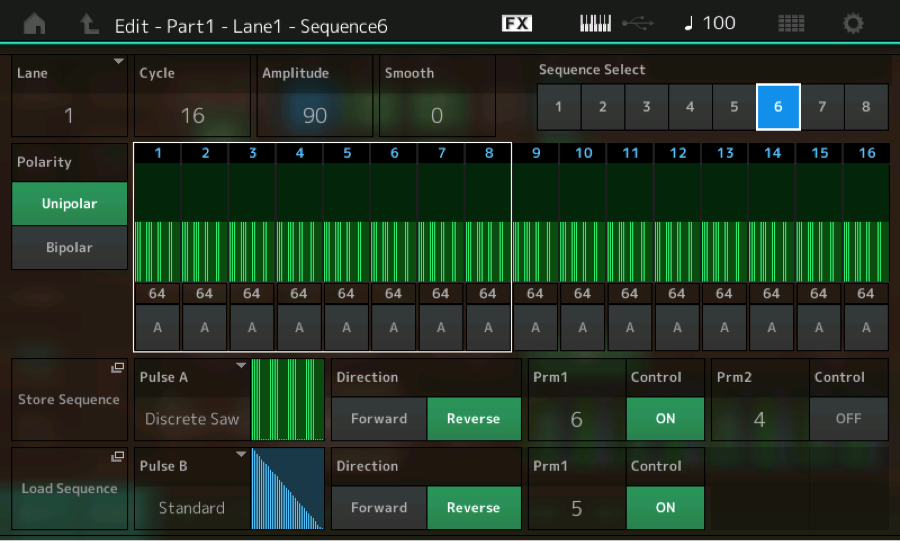 This is because Knob 4 controls the Ratio of the Modulators in a continuous manner that allows for changing them to non-integer Ratios compared to the Carrier. This is different than the whole integer steps set up on Knob 5. Non-integer Ratios between Modulators and Carriers create inharmonic overtones in the resulting FM sound. So then, the stepped behavior of Knob 5 is like adjusting the Operator Freq Ratio ‘Coarse’ parameter, while Knob 4 is like changing the ‘Fine” parameter. Use Knob 4 and Knob together to adjust the clangorous harmonics in the sound. If you don’t want any clangorous overtones, set Knob 4 to 0 and just use Knob 5 to select the integer ratios. Select Scene 7, which is similar to Scene 6 except the Motion Sequence selected for the inharmonic modulation has returned to slow triangle shape: 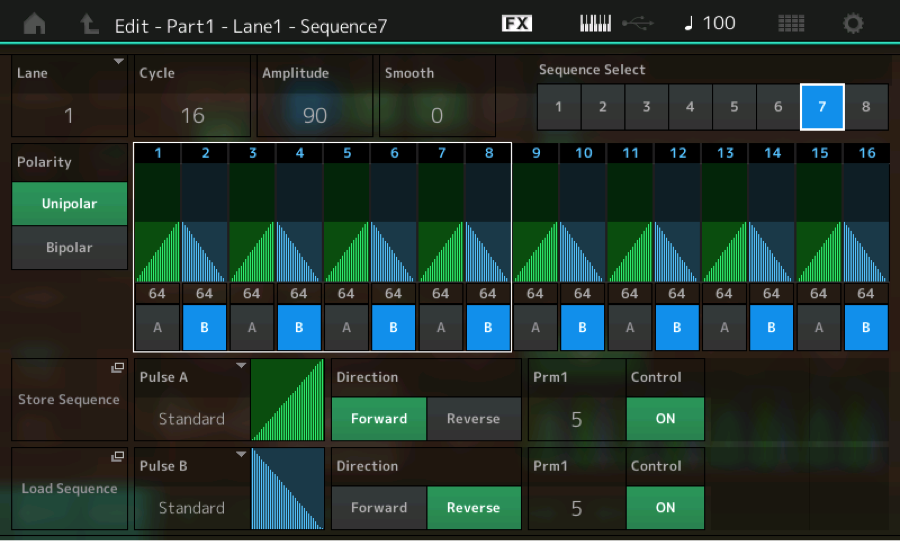 Again, play around with Knobs 4 & 5. Finally select Scene 8 which has the Knob 4 setting at maximum range of the continuous ratio control (an exact value of 2.00) and the Motion Sequence shape of an fast ascending ramp wave: 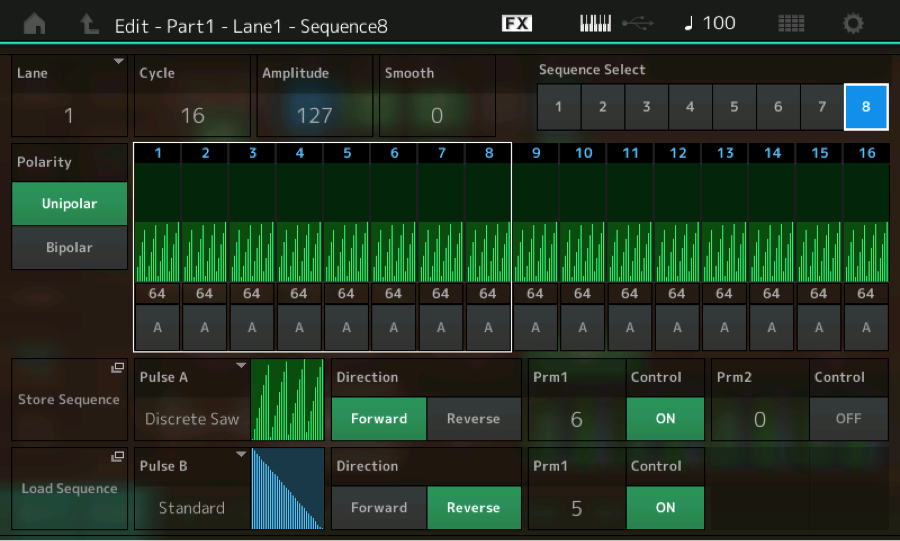 Again play around with Knobs 4 & 5 to vary the clangorous inharmonic and harmonics character of the sound. Now dig in some more: first re-select Scene 1 and set Knob 1 to a value of 110 and Knob 6 to a value of 24:

Play some notes and you will hear we’ve added a nice resonant filter quality to our slow PWM pad sound. Play around with Knob 6 to increase/decrease the Carrier Resonance and hear the changes, then finally re-set it to 24. Notice the PWM effect continues in motion, but the Resonance effect is static. Next select Scene 2 and play & hold some notes and you will hear the Resonance now sweeps up and down at a speed half that of the PWM effect. This is because “hidden in the background” as it were, Motion Sequence Lane 2 is set up to control the Resonance amount for our Carriers: 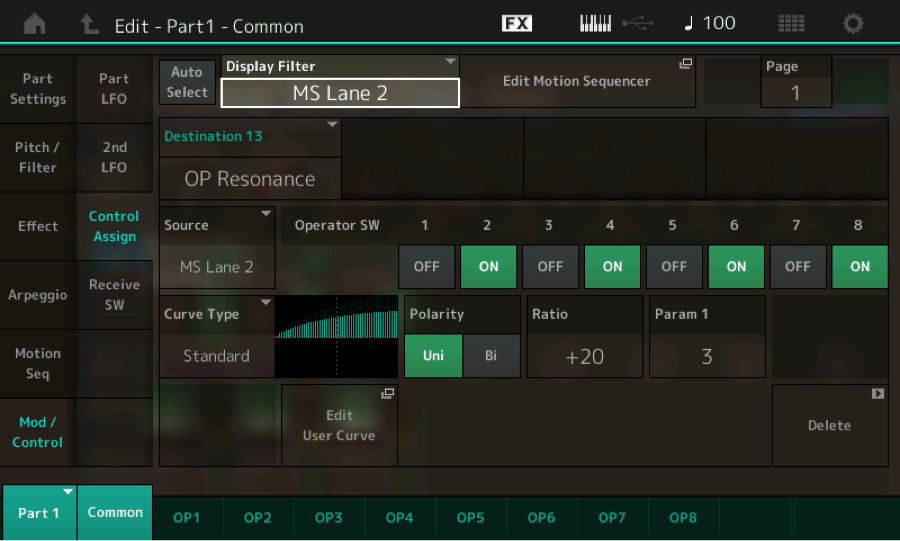 We didn’t hear this before as there is no Resonance for the default Odd 1 Wave for the Carriers. As we’ve changed Knob 1 to a value of 110 to select the Res 1 wave, the Resonance parameter is active and now it can be heard in our sound. As you play and hold notes you’ll hear the Resonance sweeping with a different pattern than the PWM effect, as the Part Motion Sequence Lane 2 Sequence 2 shape is very different than the shape of the PWM control from Lane 1: 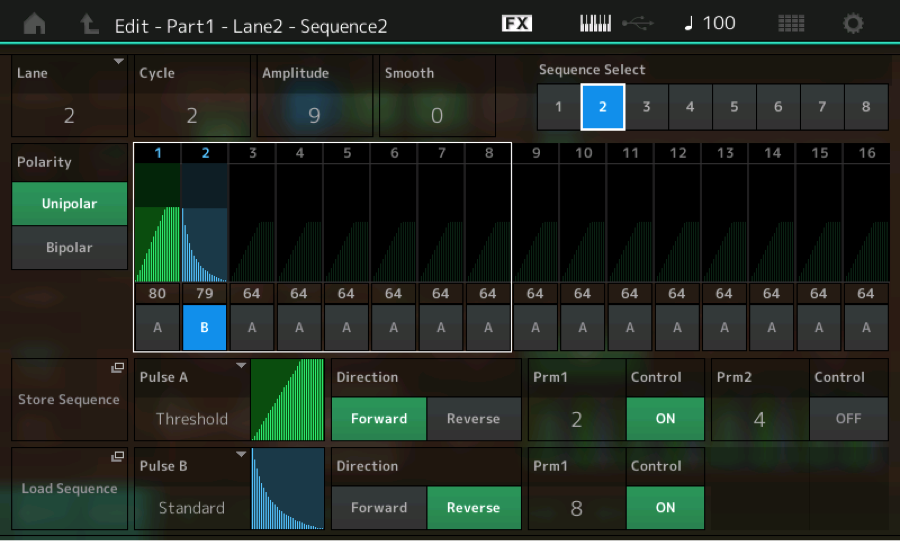 Try out the remaining Scenes 3-8 and listen how I’m combined various shapes and speeds for Lane 2 and make sure you play around with all the Knobs! Activate the Arpeggiator, play a chord to get it going, and twiddle the Knobs and switch around through the Scenes and have FUN! This is what I find so cool about the power and versatility of FM-X That was a lot this time.

Until next time, Happy Tweaking! More Performances included in the Live Set that use these concepts are:
Check out the videos below that show these Performances examples in detail:

Download the library file for all the Performances referenced in the article series here: MannyFMX_3

Questions/comments about this session? Join the conversation on the Forum here.