Bad Mister
Let's embark on our journey with the first keyboard, the organ. Some consider it also the first synthesizer, or at least "the father of synthesizers". Sounds are made by combining tones, a process referred to as "additive" when we talk about synthesizers.

We have a series of individual tone generators (be they pipes in a Pipe Organ or individual drawbars in an electronic organ), each tone source is responsible for generating a single simple pitch. When playing a single key, a more complex sound can be made by adding another tone generator (drawbar), in this case adding another simple singular pitch. The pitch of this second tone is naturally mathematically related to the first. These mathematical relationships color the sound for our ears and brain.
The first pipe organs were huge room filling affairs that would literally surround the listeners in its sound. Like no other musical instrument, the organ was bigger than life. It was tasked with emotionally moving and inspiring folks. You were literally enveloped in the sound. It could be coming at you from all sides, as the room was designed to help support and direct the SOUND onto the listener. And as in no other musical instrument, the room was totally a part of the sound and experience. This is certainly part of the charm of the Rotary Speaker which goes hand-in-hand with the most popular electronic tone wheel organ sounds. It gives a miniature version of the room shaking Pipe Organ _ so it is no accident that the motion (Doppler effect) of the Rotary Speaker fits so well with popular electronic era organ sounds. The motion of the sound gives the listener some of that same bigger than life feel of the mighty Pipe Organs.

A pipe of a particular length could make a tone of a specific pitch. The longer the pipe the lower the note; the shorter the pipe the higher the pitch of the note... We all know this from having blown across the opening of an empty bottle: The bigger the bottle the lower the pitch. That's math at work. With absolutely no talent, the average person is able to get at least two tones out of blowing across the open end of a bottle. The easiest pitch to get is called the "fundamental". Fundamental is the term used for the waveform that resonates most readily in the system. The next easiest pitch to get is quickly found by increasing the energy of your blowing and restricting slightly the slit you are passing air from (increasing its speed and intensity) suddenly out jumps a different, but related pitch. This is called the "second harmonic". And to our ears it is the same note only higher in pitch - it has doubled in the number of vibrations per second - it has gone up one octave. The musical math is in action...

Let's speed this along and bring in some mildly technical terms. You've heard them all before, but we will relate them to musical concepts you definitely know.

We need these definitions and concepts to talk about harmonics.


If we find out that it takes an 8 foot long pipe (written: 8') to recreate note middle "C" then a 4 foot (4') pipe of the same material will produce a note an octave higher. And it will be true that each time you double or halve the length of pipe you will have shifted the fundamental by an octave. 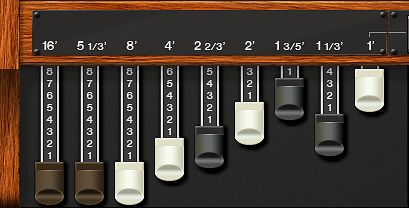 What you experience as you continue to hold the key is the original note you played when you pull out the 8' and you hear the mathematical doubling of the number of cycles per second as you engage the next whole integer drawbar. Double the frequency means go up one octave.

Now try pulling all these related Drawbars out 16', 8', 4', 2', and 1' together. Try different amounts of each - making different combinations. You are changing the identity of this sound. The 16' + 1' gives a very recognizable organ tone used in Bossa Nova and in Reggae ... These combinations of relative volumes gives us a unique overall tone. In fact, you hear the total thing and not so much the individual components, particularly when you start performing with the sound. Holding a single note invites analysis, but when placed in motion, as when executing a "musical phrase" the composition of the sound is accepted as a whole entity – and we become less cognizant of the individual loudness of each of the harmonics (overtones). This acceptance of the sound as a whole, is key to sound programming. Listening to the individual components separately, gives us a peek-behind-the-curtain... we can see how the wizard pulled off the magic. But as you begin to change the relationships of these related tones, you can see that it profoundly changes the character of the tone. By being the same pitch in different octaves this gives a strong sense of the fundamental - the other drawbars footages will completely put a new shade, a new color to the sound.

Drawbars with Fractions in their Name

But what about those other Drawbars? The ones that have fractions... Where'd they come from? Why did they choose these particular fractions? Oh no, more math! I promise we will avoid any heavy stuff (for now).

Here let's introduce some concepts about how we hear as humans. We are able to identify sounds by cataloging in our brains thousands and thousands of bits of data. Like remembering names and faces, your brain can identify the relative loudness of the different frequencies that make up a sound. These "harmonics" become the way we identify and categorize musical tonalities, voices, sounds in general. We can make remarkable guesses based on just small bits of information. We recognize peoples voices, and can even read intent into how their sounds are shaped.

Those different frequencies making up the single note are harmonics. The harmonic series is a naturally occurring series of ascending pitches such that they are whole integer multiples of the fundamental.

We'll use "A" because the math is easy enough to do in your head.

Musical intervals of a fifth (very supportive to the fundamental) and a major third add harmony within the generated tone. Learning to listen for this, is a key in sound designing. Often you only want a very little bit of one of these other pitches (harmonics) in your sound. As we go on we'll begin to see how tones that are not even generated directly can appear as part of the overall sound.

The 7th Harmonic is not used... the nine drawbars of the tone wheel type organ are derived from the 1st, 2nd, 3rd, 4th, 5th, 6th, 8th plus the SubHarmonics for the 1st and 3rd Harmonic. A decision to give the instrument a solid foundation: by doubling the root+fifth interval this gives plenty of support at the bottom of the frequency spectrum. With the harmonics available to you via the Drawbars you are able to construct various organ programs (setups).

All the drawbars are connected to individual sine wave generators. As we'll see this is significant. The sine wave being the building block of all wave shapes.

Here are some interesting facts. The pipe organ original used cyclindical metal and wood pipes to create its tones... Which were technically close to sine waves. The mighty Hammond organ used tone wheels (spinning disks in front of a magnetic pickup) to generate its sine waves. In synthesizer terminology this is referred to as "additive synthesis" - the combination of these individual sine waves are accepted by our ears and brain as a complex wave shape. 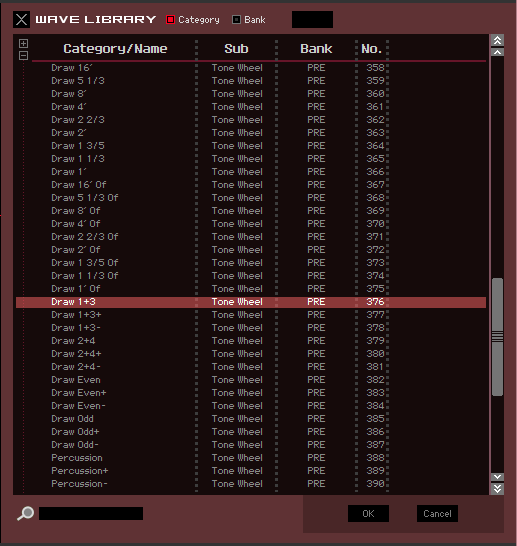 Motif XS/XF, S90 XS/S70 XS, MOXF Experiment
In the Motif XF, S90 XS/S70 XS and MOXF represented in the Preset Wave ROM are Waveforms of each of the drawbar footages. And you are given combinations, for example, the cursor highlights the "Draw 1+3" which combines the first and the third drawbars: the 16' and the 8' (SubHarmonic and the Principal) to a single Waveform. A "Draw 2+4" combination, the second and fourth drawbars (the Quint and the Octave). This is done because on the VOICE engine of the synthesizer there are but 8 Elements. So the combination Waveforms can be put to good use when attempting to recreate a specific drawbar configuration. The 8 Elements are not drawbars - they can act as individual level tone source controls which can give you the essence of what a drawbar does - but these are synthesizer emulation.

The Waveforms with "Of" in their Name are stored with out the initial Attack portion. Those with "+" or "-" in the Name are shifted in phase and are provided to expand the subtle behaviors when combining Waveforms to build a Voice.

The combination Waveforms (the lower drawbar tones) are considered the "foundation" or base upon which you build your organ sound. The upper drawbars brighten the sound and add dazzle.

Choose your 8 Waveforms wisely if you are going to construct a specific drawbar setting using the VOICE architecture in these synthesizers. No you will not have the exact same 9 separate controls of an actual organ, you are creating an emulation of the real thing. As you can tell, if each Element is used as an active tone source, building an organ tone is very expensive in terms of polyphony. Organ Voices setup to be drawbar emulations are the most polphony intensive that you can make on these sample-playback engines.

Experiment with the VOICE: "ALL BARS PERC AF1&2"
It contains the Draw 1+3 combination, the other footages are your set of drawbars
In VOICE mode:
On the Motif XS/XF: the Control Sliders 1-8 become Element Level
On the MOXF: Press the both KNOB CONTROL buttons simultaneously (all 6 LEDs light) the Knobs 1-8 become Element Level
On the S90 XS/S70 XS: Press the Control Slider button repeatedly until the LED goes OFF, the CS are now Element levels 1-4 or 5-8

Next Article: The Father of the Synthesizer III