Setup your MX49/MX61 BK/BU/WH and MX88 with Cubase on your Macintosh computer. This article is applicable to both the original MX series and the MX49/61 BK/BU/WH and MX88.
MX49/MX61 Cubase (Mac) Computer
Macintosh OSX: Launch Cubase
If you have multiple ASIO audio drivers installed on your computer, you may see a screen that allows you to select which driver you wish to use. Cubase, unlike many DAWs, allows you to "hot swap" ASIO drivers mid-Project. That is, you can switch drivers without having to close down and re-launch Cubase... you simply switch drivers. This is very convenient when more than one of your devices can act as an audio interface. 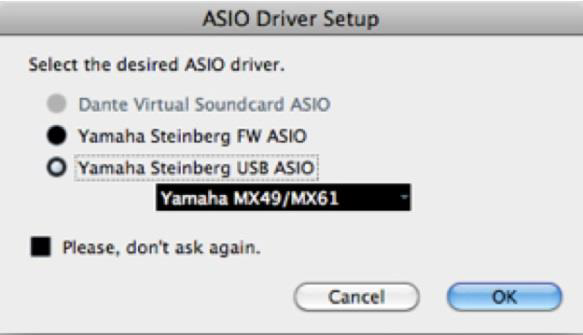 Shown, above, is the ASIO Driver select screen on a Mac OSX.
Note: If you have not downloaded and installed your MX items yet or if you don't know what to download, please go to this article before proceeding here: MX49/MX61 and your Computer 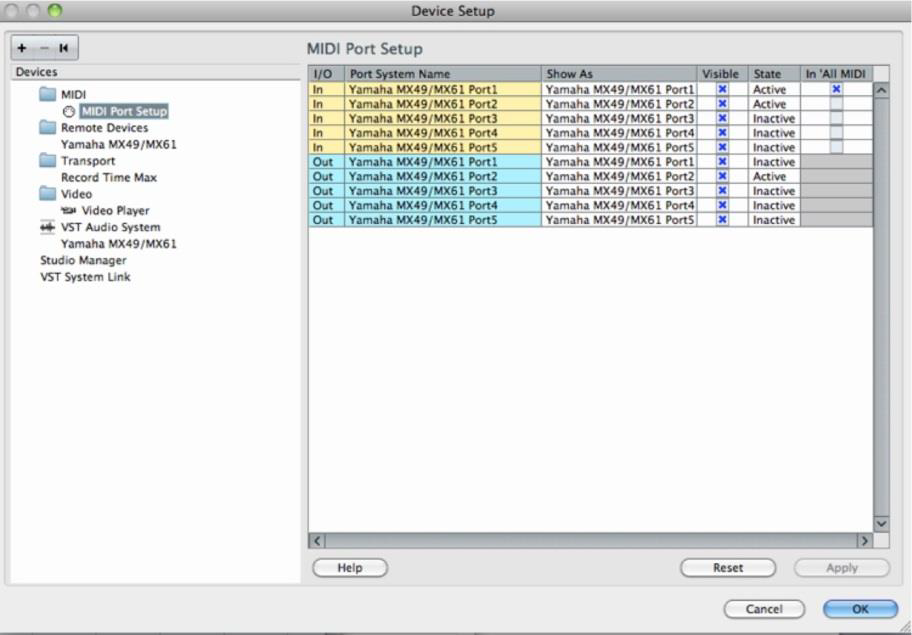 The column labeled "STATE" is a status report of what is being used currently. You do not make a setting in this column... rather it reflects the current status of your MIDI Ports – whether they are in use or not.

MIDI Port 1 – is always for musical performance events like note-ons, controllers, and tempo
MIDI Port 2, as we will discuss next, is for Remote Control functions.
MIDI Port 3, is for any external device connected to the MIDI jacks while you are setup for USB
MIDI Port 4, is not used
MIDI Port 5, is for the MX REMOTE EDITOR (which lets you create custom control templates for VSTi)

REMOTE DEVICES:
Move the cursor down to the REMOTE DEVICES folder. Here you can see that USB Port #2 is setup for Remote Control communication between the MX and Cubase. You can understand that above we setup PORT 1 for communication of MIDI data to be recorded to a MIDI Track (Note-ons, Controller movements, Tempo, etc.), now we are setting a separate Port on which to communicate Remote Control commands. These must be kept completely separated from our musical performance commands. 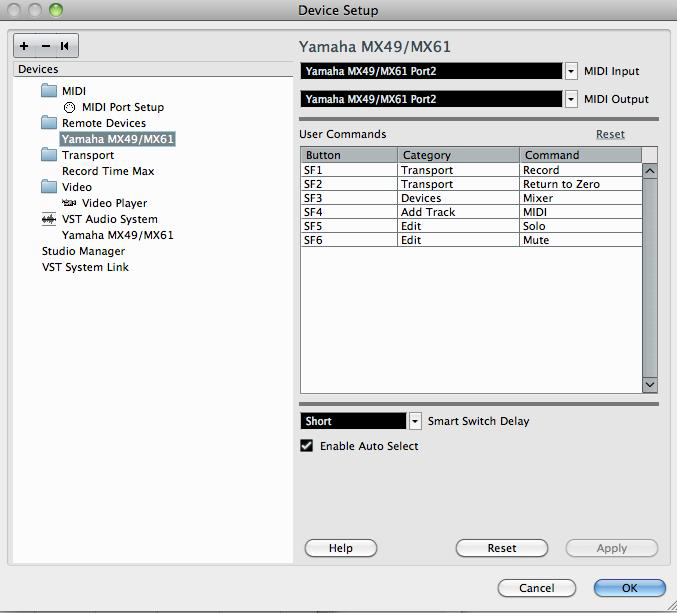 The items written below the bottom row of buttons (9-16) with the white background are the DAW REMOTE functions. These include selecting the function for the DATA WHEEL/AI KNOB, Controlling external VST instruments, activating Automation, a Delete function.

VST AUDIO SYSTEM
Up until now we have been dealing with the MIDI side of the Yamaha Steinberg USB driver. Both musical performance communication (Port 1 and 3) and DAW remote control communication (Port 2) are functions of MIDI data. The VST AUDIO SYSTEM deals with how audio is going to move from the MX to your computer (Cubase) and how audio recorded in the computer is routed back to the MX and then on to your speakers. 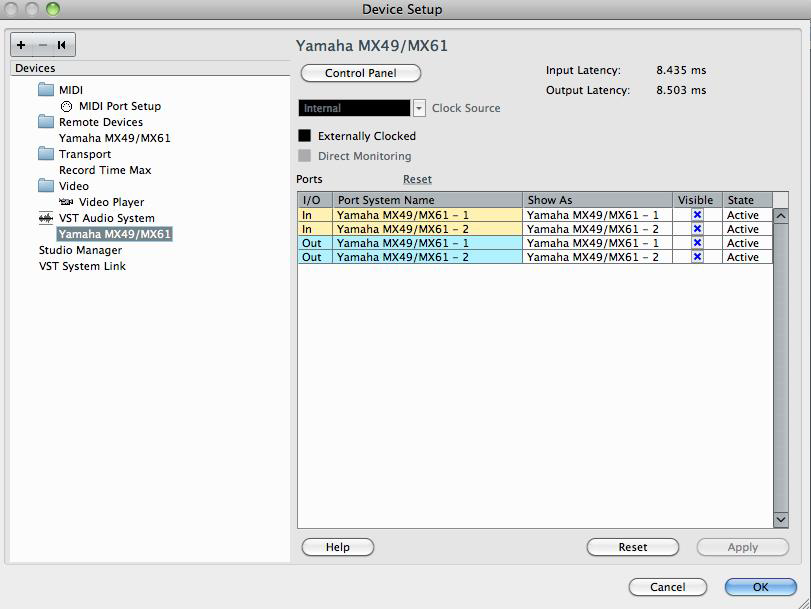 You now have moved through the items you need to setup in Cubase > DEVICES > DEVICE SETUP... Next we will install the MX49/MX61 VOICE LIST for CUBASE

IMPORTING the "MX49/MX61 VOICE LIST for CUBASE" into MIDI DEVICE MANAGER
This item contains a list of the VOICES found in your MX (file type = .XML), and will allow you to use the Cubase MIDI Track Inspector to conveniently select Voices by CATEGORY directly on each Track. Download and unzip the file so a known location on your computer. You will need to navigate to this file and IMPORT it into the Cubase MIDI Device Manager.
Go to DEVICES > MIDI DEVICE MANAGER

Click on "IMPORT SETUP"
This will open your navigator...
Direct it to the .XML file that you downloaded (Voice List for Cubase)
Select it.
It will appear in the "INSTALLED DEVICES" column.

Highlight it in the "INSTALLED DEVICES" column and set the "OUTPUT" window to "Yamaha MX49/MX61 Port 1" (the music port).

If you click where it indicated "OFF" the MX Voice List will drop down and you can select a VOICE for this Track.
Tweet
MOXF: Setting up a Microphone, Guitar or other A/D...
Yamaha MX and Your Computer