Blake's Take: Level Up Your Drums 1 - Basic Concepts of Rhythm 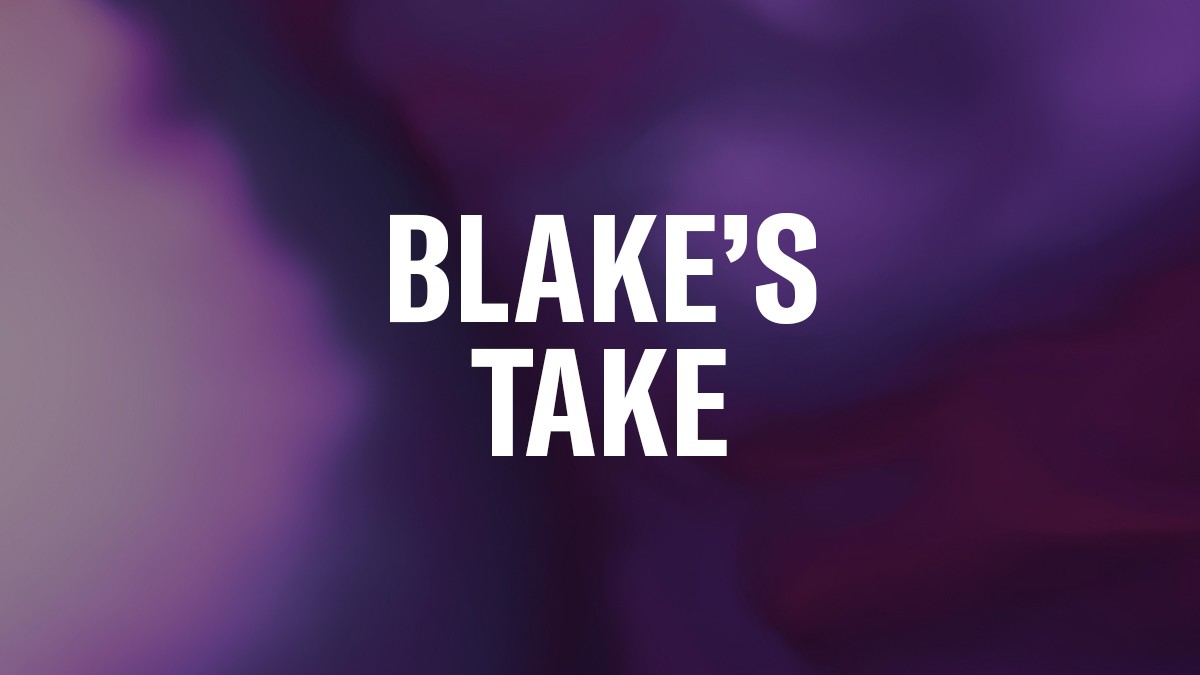 Check out the other articles in this series:

Blake's Take: Level up Your Drums 3 - Drum Programming in MONTAGE and MODX

Blake's Take: Level Up Your Drums 4 - Multitrack Recording to the DAW - Yamaha Synth


I find drum programming an important and enjoyable part of music creation. Drum programming teaches you about drums as an instrument, improves your feel and groove and helps you understand rhythm. This series is designed to give you a more philosophical approach to creating musical drum tracks. Here are the topics to look for over the next few weeks:


Entire books have been written about rhythm and I am not attempting to write another one here. However, I think it’s useful to look at a few basic concepts. I’ve divided them down into the following topics:


Let’s start with the basic idea of rhythm. Rhythm refers to the organization of beats as they occur in time. The word itself comes from the Greek word “rhythmos (ῥυθμός)”. The Cambridge dictionary defines rhythm as “a strong pattern of sounds, words, or musical notes used in music, poetry, and dancing”. In music this includes things like the duration of notes and rests, the recurrence of accented beats (like a back beat) how beats subdivide and the style of music (rock, jazz swing, hip hop, bossa nova, etc.). Understanding basic rhythm concepts is essential for creating cool drum parts. Notes, time signatures, tempo, meter, subdivisions, accents, syncopation and time feel are key rhythmic concepts. In this article, I’ll define each of these concepts. If you have a music theory background, these ideas will be familiar to you, but don’t worry if you haven’t. These concepts are pretty easy to understand. Plus, they highlight the beautiful symmetry of music and enhance your rhythmic understanding.


Music notation identifies rhythmic placement, duration of a pitch and the number of beats in a measure. This is the first step in understanding how time is expressed.

This sequence continues by adding another “flag” which doubles the number of notes. Three flags will give you 32 thirty-second notes (1/8 beat) four flags are 64 sixty-fourth notes (1/16 beat). The measure duration of each level—whole, half, quarter, eighth, sixteenth and son on—is the same at any given tempo or BPM (Beats Per Minute). Check out the subdivision graphic below: 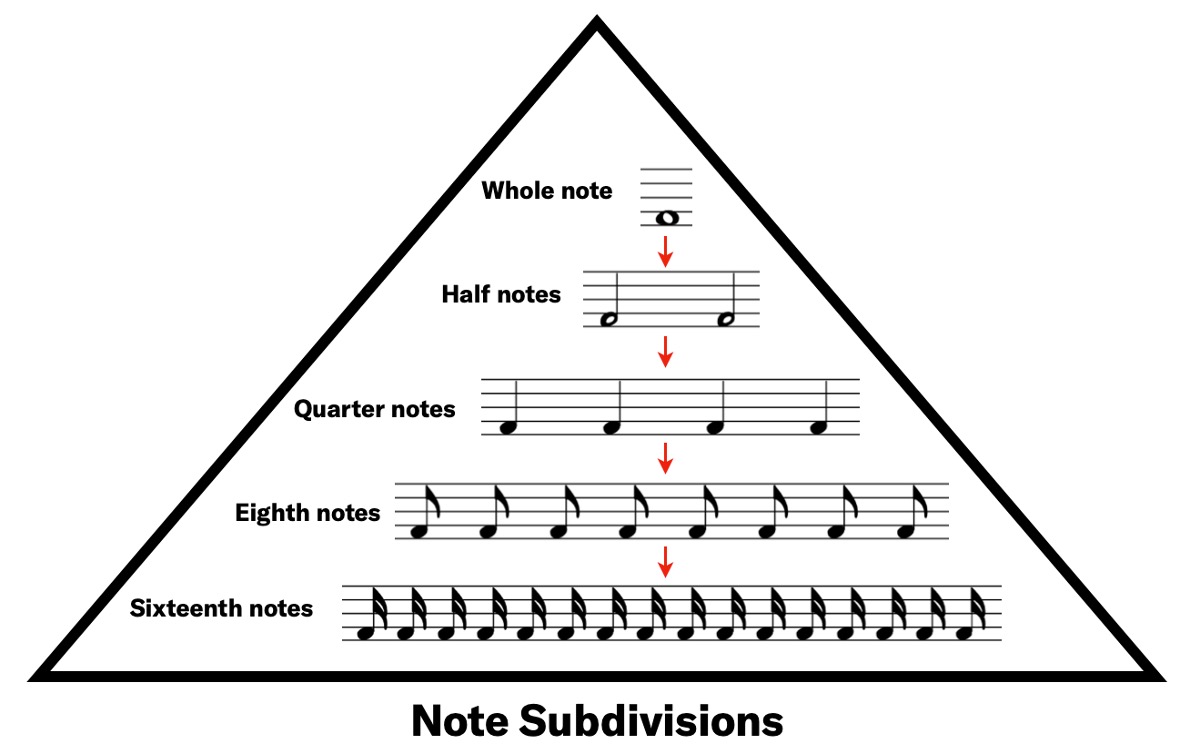 Note subdivisions and time signatures are important aspects of rhythm. Since music is a linear art (meaning that it happens over a given time frame) how fast or slow the music unfolds is also important. That is referred to as tempo.


Tempo is the rate of the beat or pulse of the music. Tempo is expressed in BPM. The right tempo can make all the difference. A few thoughts about Tempo:


Tempo is a simple concept but the impact it has on music is powerful. Want to check out a great podcast about the power of tempo? Go to this Radiolab segment, and check out the related videos of Brooklyn Philharmonic musicians playing Beethoven’s Fifth at 160 BPM (Beethoven himself marked it at 108 BPM). 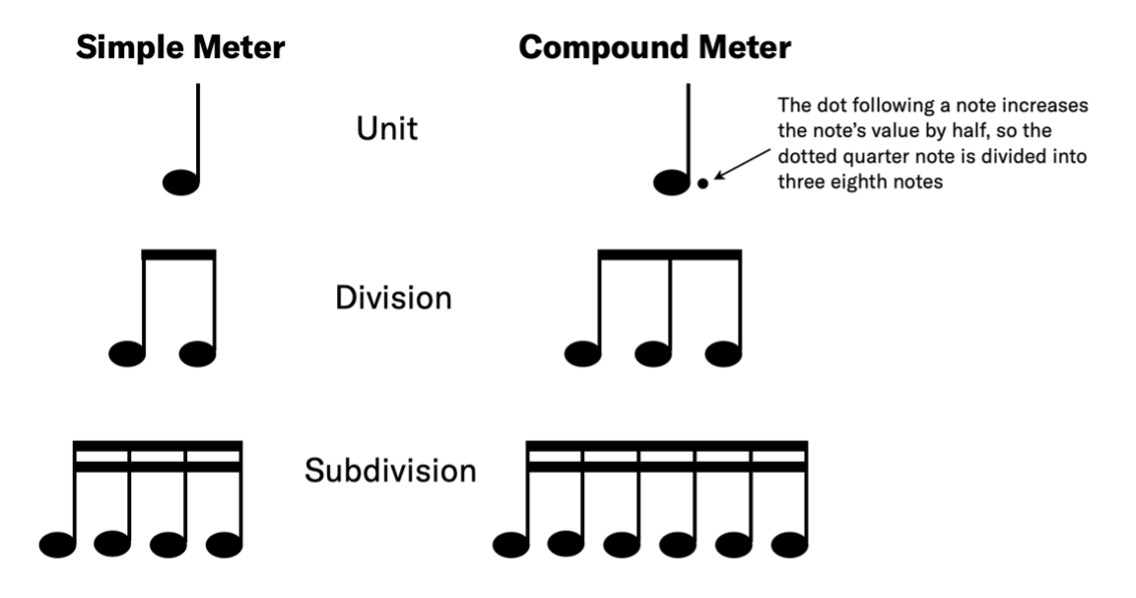 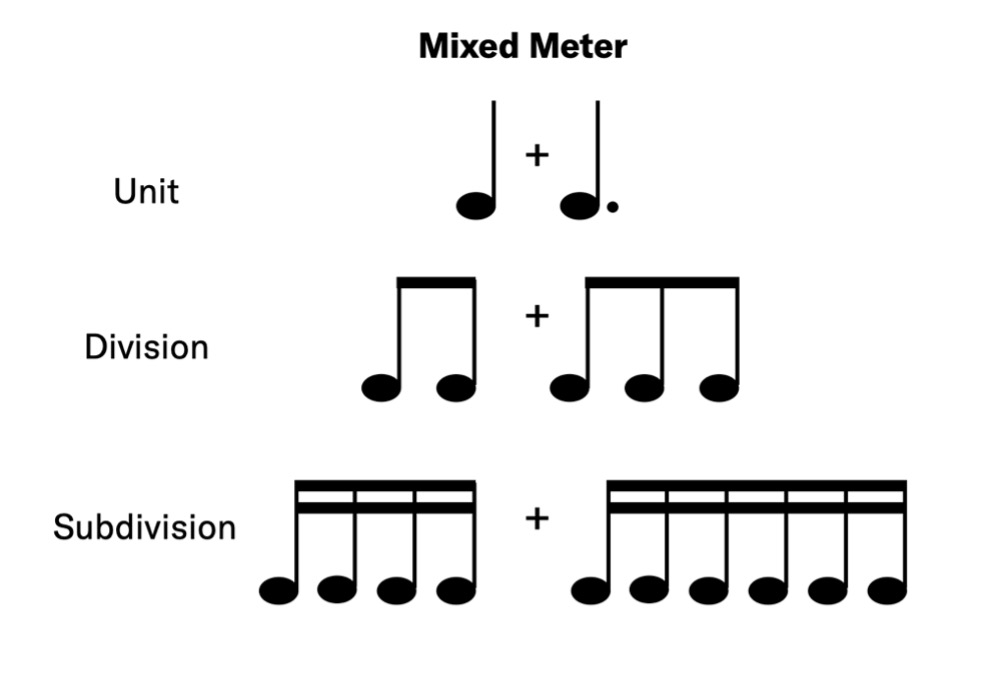 Mixed meters can be divided in different ways. 5/8 can divide as 2 + 3 or 3 + 2; 7/8 can divide as 2 + 2 + 3, 3 + 2 + 2 or 2 + 3 + 2. Often, the first beat of a unit is emphasized in mixed meter, so a 7/8 time signature subdivided as 2 + 2 + 3 could be counted “ONE two, ONE two, ONE two three” where beat ONE is accentuated. This brings up another important part of rhythm: accents. Accents are beats played with more emphasis to give meter forward momentum and stylistic identity. Often the first beat gets the strongest accent and provides a pulse. In rock music, the snare drum outlines beats 2 and 4 and provide a backbeat.

Accents can also happen on divisions and subdivisions and can be unexpected. This is called syncopation. Many genres of music feature syncopated rhythms like jazz, R&B funk, rock, etc. Syncopation adds variety to an otherwise unified rhythmic pulse.


With these basic rhythmic concepts in mind, let’s move on to the concept of swing. Swing has to do with the performance of the beat division. In the most basic sense:

In a musical score swing eighth notes are not written like the graphic above which merely approximates the feel of swing eighth notes. The word “swing” is written at the top of the score often with a modifier like “medium” or “fast.” Check out the example below: 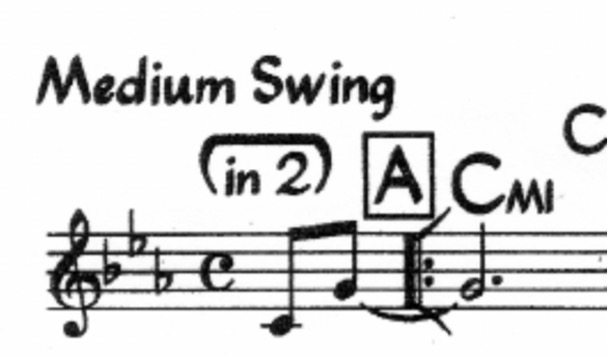 The eighth notes are played with a swing feel because of the instruction “Medium Swing. “In 2” is also given, meaning that the feel is Medium Swing and the bassist will play on beats one and three until “in 4” or “bass walks” is added.

There are also gradations between a straight and swing feel. As tempo increases, the “swung” eighth note often “straightens out” or moves closer to the actual eight note value. You may have seen the term “swing rate” or “swing amount” in the quantize section of a DAW. This allows you to adjust the amount of swing. That parameter is called “Swing Rate” in MODX and MONTAGE. I’ll explore all this in detail in subsequent articles. For now, let’s check out a few examples illustrating the difference between a straight and a swing feel.

First up is a basic straight feel rock beat:

This is a four-measure beat played twice. The hi-hat outlines the eighth note subdivision, the snare plays on beats two and four and the kick drum plays a two-measure phrase alternating with the snare. I played the open high-hat on the first beat of measure two and four to add a bit of variety. Here is what it looks like:

Again, all that is different is the feel, but what a difference! You might wonder how one would transcribe this. The answer is exactly the same way as the straight feel but with an instruction like “swing” or more precisely “rock shuffle” because this groove has a snare backbeat. “Shuffle” is a word that conveys a similar vibe as “swing”.

There is a key point to observe in this simple drum pattern: Kick-snare interplay is a fundamental aspect of how drummers play. The interplay of all the drum kit components—kick, snare, toms, hi-hat, cymbals—is important too. Great drummers have incredible coordination. They practice four-limb independence and creative interplay between all parts of the drum kit. It is one of the reasons great drummers are so fun to watch!

Now let’s take a look and listen at a second drum pattern with an eighth note subdivision. This is a four-measure swing pattern (swing feel set at 66%, right at the triplet subdivision):

Now listen to the exact same drum pattern but this time set to straight feel:


That’s quite a difference. Again, time feel and subdivision is a powerful thing. That simple change from swing to a straight feel makes a huge musical difference.
Now let’s take a look at sixteenth note subdivisions. Again, the tempo remains the same at 100 bpm, but the overall feel is “busier” since the subdivision is doubled from the eighth note. The straight feel drum pattern below is a four-measure groove played twice, features the hi-hat outlining the sixteenth subdivision, snare on beats two and four and the kick drum both accentuating the beat one and providing some syncopation. This is a fairly standard straight funk groove:

Here is the transcription:

In the next two examples, I’ve changed the feel from straight to swing using different percentages. As with the previous examples the notes remain the same. The first version is the swing feel is set a 66%, or right at the sixteenth note triplet subdivision: 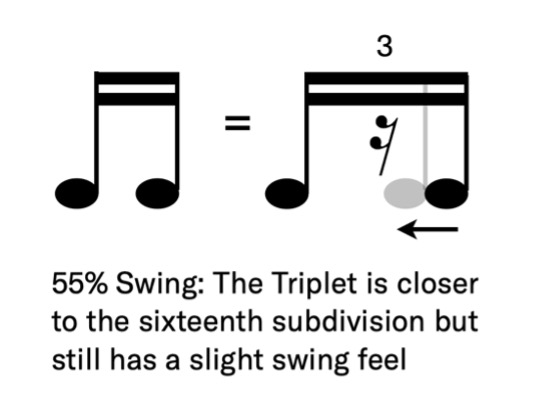 In most of the examples, the subdivisions were clearly defined by design. I tried to keep syncopated accents to a minimum and focused on consistent beat definition. The final examples add additional syncopation and don’t clearly outline beats two and four. The first example is an eight-measure straight feel played twice:


Here is the transcription:

The syncopated accents give this pattern an entirely different vibe. The feel changes from the previous funk groove examples to a jazz fusion feel. This happens because of the additional syncopation. I change up the hi-hat pattern, add more open hi-hat accents and I remove the kick drum from the downbeat in certain measures. All of these elements open up the feel and variety making the overall groove less predictable.

Now check out the same pattern with a swing of 55% added:

I think the 55% swing is even more desirable for this drum pattern because of the syncopated accents. It’s a busier beat overall and a 66% swing wouldn’t sound as good to me. The lighter swing percentage gives this drum pattern a hip buoyancy. What do you think?

There are certainly other factors involved in great time feel. Where a drummer sits in the underlying time—on top of, in the center of, or behind the beat—is another crucial part of a great drum groove. How space and dynamics are used play an important role too. I’ll explore these concepts and more in upcoming articles of this series.

In the next installment I’ll introduce the concept of active listening and share a few videos from our world-class drum artists. Understanding basic rhythmic concepts is certainly helpful but watching and deeply listening to great drummers play the drums is just as important.

Blake's Take: Level Up Your Drums 4 - Multitrack Recording to the DAW

Level Up Your Gigs: The Art of EQ

Level Up Your Gigs: Amplifying Keyboards

Blake's Take: Level Up Your Drums 3 - Drum Programming in MONTAGE and MODX